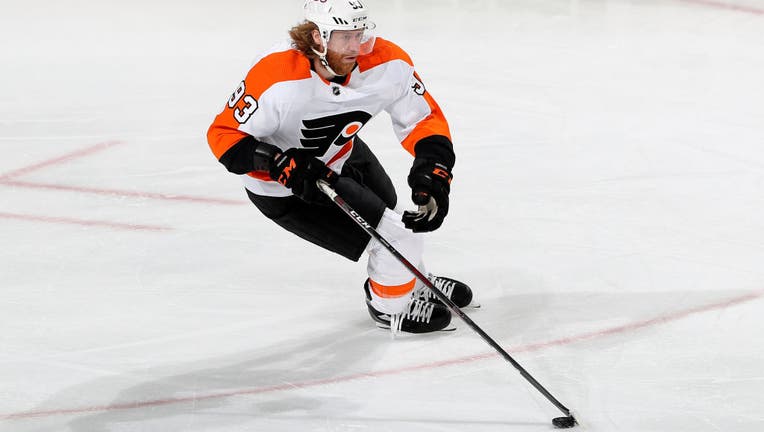 NEWARK, NEW JERSEY - APRIL 27: Jakub Voracek #93 of the Philadelphia Flyers takes the puck against the New Jersey Devils in the first period at Prudential Center on April 27, 2021 in Newark, New Jersey. (Photo by Elsa/Getty Images)

PHILADELPHIA - A familiar bearded face is going back to Columbus, with the Blue Jackets' longest tenured player heading to Philadelphia.

The Flyers sent Jakub Voracek to the Blue Jackets for Atkinson on Saturday, the first major trade on the second day of the NHL draft. The moves are expected to keep on coming during a busy offseason.

Voracek, who turns 32 in August, returns to the team that drafted him in 2007 after a much-needed split with the Flyers, with whom he spent the past 10 seasons and put up 604 points in 727 regular-season games.

Atkinson leaves the only NHL organization he has ever been with after scoring 213 goals in 627 games with the Blue Jackets. Columbus has traded Atkinson, Seth Jones, David Savard and former captain Nick Foligno over the past four months.

"This is a significant trade for our club and we are very excited to welcome Jake Voracek back to the Blue Jackets family.," Columbus general manager Jarmo Kekalainen said. "He is a powerful, dynamic offensive player that will be a significant contributor to our club. Adding a player like that comes at a cost, and I want to thank Cam Atkinson for his many contributions to the Blue Jackets and Columbus community over the past 10 years."

It’s Philadelphia’s second major trade in two days after acquiring defenseman Rasmus Ristolainen from Buffalo for the No. 14 pick this year and a 2023 second-rounder. After taking on Ristolainen's big contract, GM Chuck Fletcher saved more than $2 million in cap space by swapping Voracek for Atkinson.

The Colorado Avalanche began the day by signing top defenseman Cale Makar to a $54 million, six-year contract. Makar will count $9 million against the salary cap through the 2026-27 season.

His deal comes on the heels of Chicago acquiring Jones from Columbus and extending the star defenseman for $76 million over eight seasons and Dallas inking Miro Heiskanen to a $67.6 million, eight-year contract.

Makar was a point-a-game player last season, his second in the NHL, and the 22-year-old has 94 points in his first 101 regular-season games. He's set to make $8 million next season, $9 million in the second year, then $11 million, $10.6 million, $8.7 million and $6.7 million as part of a contract that takes into account the expected rise of the salary cap.

While the second round was going on, Edmonton completed a $4.4 million, two-year deal with 39-year-old goaltender Mike Smith, and the New York Rangers completed a buyout of defenseman Tony DeAngelo.