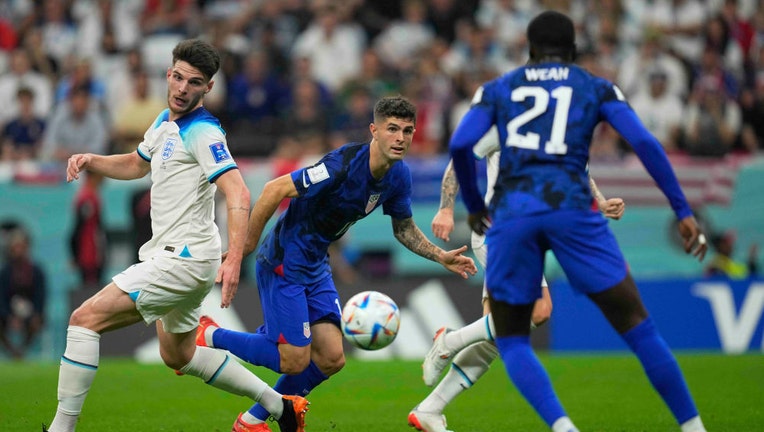 Christian Pulisic of the U.S. men's team controls the ball during the FIFA World Cup Qatar 2022 Group B match between England and USA at Al Bayt Stadium on November 25, 2022. (Ulrik Pedersen/DeFodi Images via Getty Images)

AL RAYYAN, Qatar - At the World Cup, there’s no "better luck next time" because next time isn’t guaranteed.

Lose a Super Bowl or Game 7 of the NBA Finals? No question, it is incredibly difficult to make it back to that moment. But Patrick Mahomes and Kevin Durant can always try again next season.

At the World Cup, like the Olympics, players have an opportunity every four years to win on their sport’s biggest stage.

Some, such as Lionel Messi and Cristiano Ronaldo, will play in five of these tournaments in their lifetime. Others, like 35-year-old starting U.S. center back Tim Ream, might just get the one. Sometimes age phases players out or injuries derail their dreams. Other times, their teams don’t qualify. Regardless, knockout games in a World Cup are especially cruel.

The United States faces Iran on Tuesday at Al Thumama Stadium in the third match of Group B (2 p.m. ET on FOX and the FOX Sports app).

It serves as an early knockout game for the Americans because they must win to advance to the round of 16. That’s not the case for Iran. It can tie the U.S. and make it out of the group thanks to a dramatic 2-0 victory over Wales on Friday night (the U.S. men’s national team is not as fortunate after tying both Wales and England in its first two games).

It’s not lost on the USMNT that this is its big moment.

"Our goal is to win the World Cup and in order to do that, we have to get through the knockout stages," defender Walker Zimmerman said Sunday night. "For us, our knockout game comes one game earlier. You look around at the other teams and groups, and a lot are going into their third game having to get a result, whether that’s a win or a tie.

"There’s going to be pressure. And for us, [we need] a win, and we have no problem with starting our knockout a little bit earlier."

Before leaving for Qatar, any time coach Gregg Berhalter was asked about his team’s goals, he would answer by saying there are "two tournaments" — one being the group stage, the other being the knockout rounds. He’d explain how the team wants to focus on getting out of the group first, then focus on winning each game to keep advancing deeper.

The U.S. is in the knockout stage one game early because it put itself in this situation. The USMNT needed to beat Wales to not leave the third and final group match up to chance. Unfortunately, Zimmerman’s late penalty on Gareth Bale, in which the Welsh captain converted an equalizing penalty kick in the 82nd minute, cost them the win.

The U.S. also failed to capitalize on scoring chances in a 0-0 draw against England, a game Berhalter’s squad dominated and could have won.

Now, the U.S. finds itself in a risky situation. It’s win or go home. The Americans can’t come back next season and try again, because the next World Cup is not until 2026.

Many U.S. players are expected to still be playing for the national team then, especially given how historically young the team is, but Ream can’t count on that at his age. Zimmerman, 29, can’t bank on it either. Nobody truly can.

France is a perfect example, with so many stars missing out on this World Cup because of injuries, like 2022 Ballon d’Or winner Karim Benzema, who was ruled out of the tournament after injuring his left thigh during training before the defending champions’ opening match against Australia.

"It is a unique situation," Ream said. "It adds a little bit more pressure, but for us, every single game is pressure. And so we have to go out and just embrace the moment. Enjoy it and live it and not worry about what comes after, whether it’s good, bad or indifferent.

"We have to go out and play the way we’re capable of playing, finish our chances and enjoy the fact that it is a knockout stage game one round early."

As far as finishing chances, the U.S. has struggled. Through two games, the U.S. has 11 shots with only one goal. There was a point against England when the USMNT had five straight corner kicks in five minutes, but failed to capitalize.

"We certainly have created some chances," Zimmerman said. "We have to be sharper and finish that final pass. Set pieces are a huge strength of this team and so you know, we have to go back and look at the plays, watch all of them and see what we can do differently.

"It’s going to come down to little things on set pieces, so we definitely need to work on those and make sure that can be a real strength of ours because I think we have the personnel to score goals off set pieces."

Otherwise, the Americans will have to wait a little longer for their next big break.

Link: Get the latest updates on this story at FOXSports.com.