President Biden remarks on situation in the Middle East

President Biden took reporter questions during a COVID-19 press conference, remarking on the situation in the Middle East.

GAZA CITY, Gaza Strip (AP) -  Israel on Wednesday pressed ahead with a fierce military offensive in the Gaza Strip, killing as many as 10 senior Hamas military figures and toppling a pair of high-rise towers housing Hamas facilities in a series of airstrikes. The Islamic militant group showed no signs of backing down and fired hundreds of rockets at Israeli cities.

In just three days, this latest round of fighting between the bitter enemies has already begun to resemble — and even exceed — a devastating 50-day war in 2014. Like that previous war, neither side appears to have an exit strategy.

But there are key differences. The fighting has triggered the worst Jewish-Arab violence inside Israel in decades. And looming in the background is an international war crimes investigation.

Israel carried out an intense barrage of airstrikes just after sunrise, striking dozens of targets in several minutes that set off bone-rattling explosions across Gaza. Airstrikes continued throughout the day, filling the sky with pillars of smoke.

At nightfall, the streets of Gaza City resembled a ghost town as people huddled indoors on the final night of Ramadan. The evening, followed by the Eid al-Fitr holiday, is usually a time of vibrant night life, shopping and crowded restaurants.

Two people were killed in Ashkelon on May 11, as rockets from the Gaza Strip targeted south Israel amid back-and-forth attacks. Credit -Israel Police via Storyful

"There is nowhere to run. There is nowhere to hide," said Zeyad Khattab, a 44-year-old pharmacist who fled with a dozen other relatives to a family home in central Gaza after bombs pounded his apartment building in Gaza City. "That terror is impossible to describe."

Gaza militants continued to bombard Israel with nonstop rocket fire throughout the day and into early Thursday. The attacks brought life to a standstill in southern communities near Gaza, but also reached as far north as the Tel Aviv area, about 70 kilometers (45 miles) to the north, for a second straight day.

The military said sirens also wailed in northern Israel's Migdal Ha’Emek area, the farthest the effects of Gaza rockets have reached since 2014.

"We're coping, sitting at home, hoping it will be OK," said Motti Haim, a resident of the central town of Beer Yaakov and father of two children. "It's not simple running to the shelter. It's not easy with the kids."

Gaza’s Health Ministry said the death toll rose to 67 Palestinians, including 16 children and five women. Islamic Jihad confirmed the deaths of seven militants, while Hamas acknowledged that a top commander and several other members were killed.

A total of seven people have been killed in Israel, including four people who died on Wednesday. Among them were a soldier killed by an anti-tank missile and a 6-year-old child hit in a rocket attack.

The Israeli military claims the number of militants killed so far is much higher than Hamas has acknowledged.

Lt. Col. Jonathan Conricus, a military spokesman, said at least 14 militants were killed Wednesday — including 10 members of the "top management of Hamas" and four weapons experts. Altogether, he claimed some 30 militants have been killed since the fighting began.

More raids conducted early Thursday were aimed at several "strategically significant" facilities for Hamas, including a bank and a compound for a naval squad, the military said.

While United Nations and Egyptian officials have said that cease-fire efforts are underway, there were no signs of progress. Israeli television's Channel 12 reported late Wednesday that Prime Minister Benjamin Netanyahu’s Security Cabinet authorized a widening of the offensive.

Understanding what has fueled the latest clashes in Jerusalem

Palestinian protesters and Israeli police have clashed on a daily basis for weeks in and around Jerusalem’s Old City. Here's a brief explainer on what has fueled the most recent conflict.

U.N. chief Antonio Guterres condemned the "indiscriminate launching of rockets" from civilian areas in Gaza toward Israeli population centers, but he also urged Israel to show "maximum restraint." U.S. Secretary of State Antony J. Blinken called Netanyahu to support Israel's right to defend itself and said he was sending a senior diplomat to the region to try to calm tensions.

The current eruption of violence began a month ago in Jerusalem, where heavy-handed Israeli police tactics during the Muslim holy month of Ramadan and the threatened eviction of dozens of Palestinian families by Jewish settlers ignited protests and clashes with police. A focal point was the Al-Aqsa Mosque, built on a hilltop compound that is revered by Jews and Muslims, where police fired tear gas and stun grenades at protesters who threw chairs and stones at them.

Hamas, claiming to be defending Jerusalem, launched a barrage of rockets at the city late Monday, setting off days of fighting.

The Israeli military says militants have fired about 1,500 rockets in just three days. That is roughly one-third the number fired during the entire 2014 war.

Israel, meanwhile, has struck over 350 targets in Gaza, a tiny territory where 2 million Palestinians have lived under a crippling Israeli-Egyptian blockade since Hamas took power in 2007. Two infantry brigades were sent to the area, indicating preparations for a possible ground invasion. 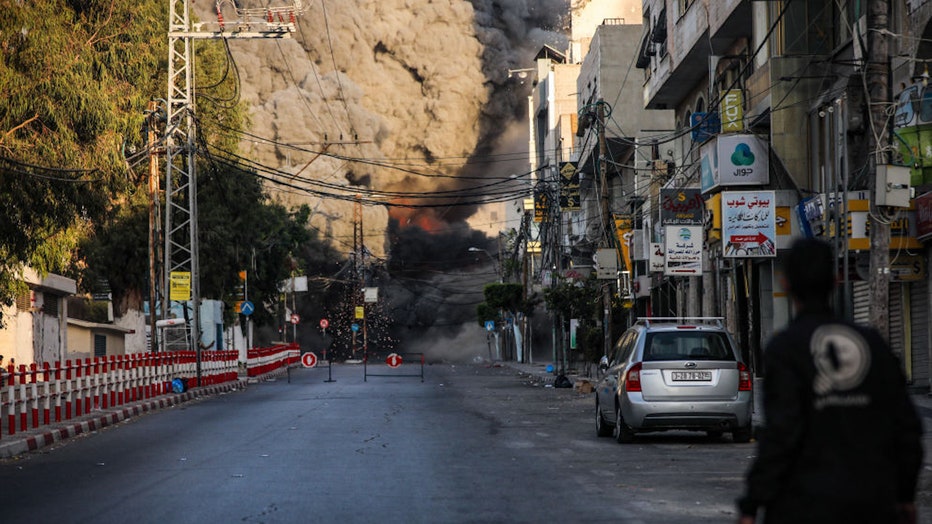 FILE - A missile lands on a tower building during Israeli air strikes amid a flare-up of Israeli-Palestinian violence, in Gaza City.

In tactics echoing past wars, Israel has begun to target senior members of Hamas’ military wing. It also has flattened three high-rise buildings in a tactic that has drawn international scrutiny in the past.

Israel says the buildings all housed Hamas operations centers, but they also included residential apartments and businesses. In all cases, Israel fired warning shots, allowing people to flee, and there were no reports of casualties.

The fighting has unleashed violent clashes between Arabs and Jews in Israel, in scenes that have not been seen since 2000. Netanyahu warned that he was prepared to use an "iron fist if necessary" to calm the violence.

But ugly clashes erupted across the country late Wednesday. Jewish and Arab mobs battled in the central city of Lod, the epicenter of the troubles, despite a state of emergency and nighttime curfew. In nearby Bat Yam, a mob of Jewish nationalists attacked an Arab motorist, dragged him from his car and beat him until he was motionless.

In the occupied West Bank, the Israeli military said it thwarted a Palestinian shooting attack that wounded two people. The Palestinian Health Ministry said the suspected gunman was killed. No details were immediately available. 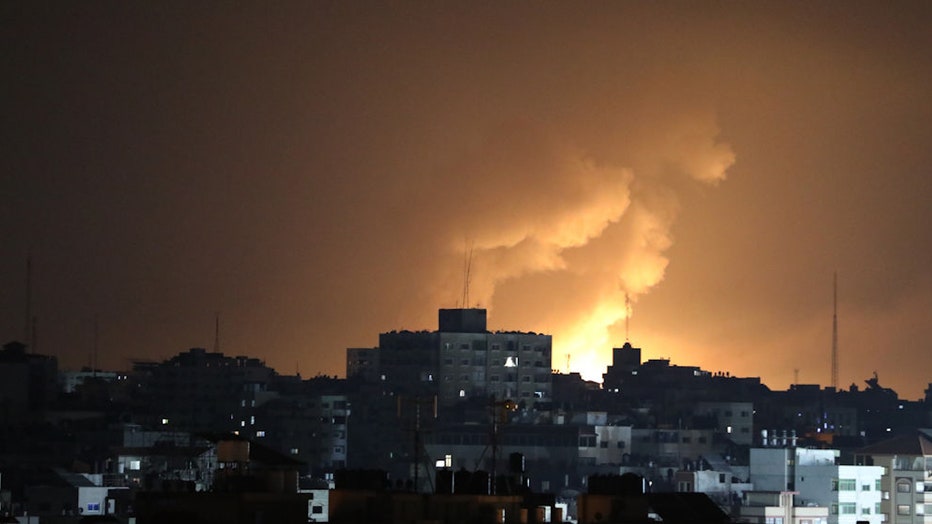 FILE - Smoke and flames rise after Israeli fighter jets conducted airstrikes over Beit Lahia in the Gaza Strip, on May 13, 2021.

Still unclear is how the fighting in Gaza will affect Netanyahu’s political future. He failed to form a government coalition after inconclusive parliamentary elections in March, and now his political rivals have three weeks to try to form one.

His rivals have courted a small Islamist Arab party. But the longer the fighting drags on, the more it could hamper their attempts at forming a coalition. It could also boost Netanyahu if another election is held, since security is his strong suit with the public.

Israel and Hamas have fought three wars since the Islamic militant group seized power in Gaza from rival Palestinian forces in 2007.

The International Criminal Court has launched an investigation into possible war crimes by Israel and Hamas. In a brief statement, ICC prosecutor Fatou Bensouda said she had noted "with great concern" the escalation of violence and "the possible commission of crimes."

The ICC is looking into Israeli actions in past wars in Gaza. Israel is not a member of the court, does not recognize the ICC’s jurisdiction and rejects the accusations. But in theory, the ICC could issue warrants and try to arrest Israeli suspects while traveling overseas. 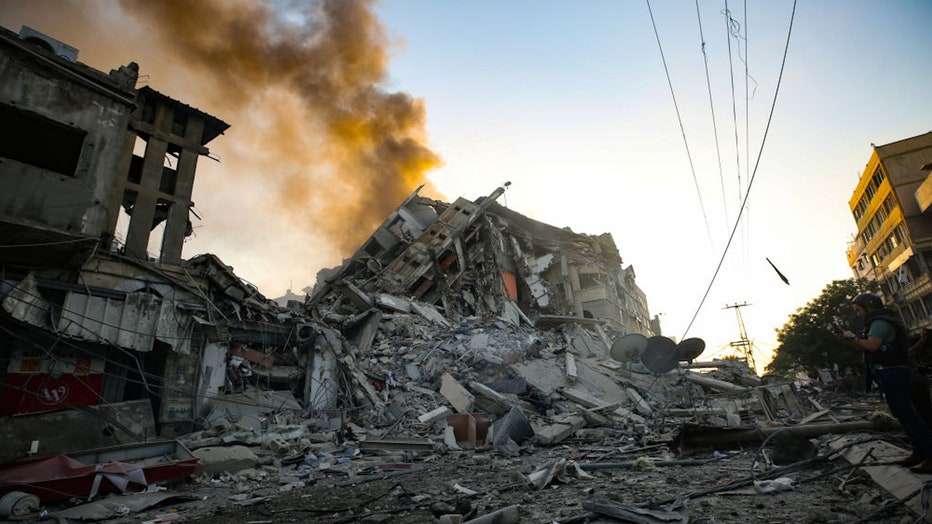 FILE - View of the debris of Al-Sharouk tower that collapsed after being hit by an Israeli air strike.

Emanuel Gross, a professor emeritus the University of Haifa law school, said Israel should "take into consideration the concerns of the ICC." But he said he believes the military is on solid legal ground while rockets are striking Israeli cities.

"That’s the real meaning of self defense," he said. "If you are attacked by a terrorist group, you defend yourself."