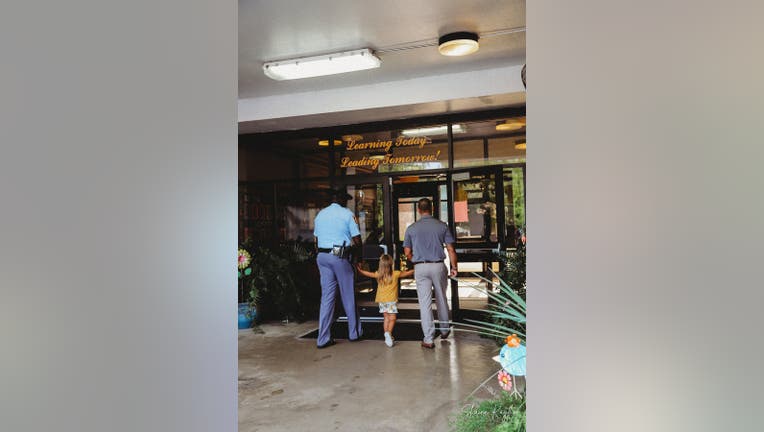 CRISP COUNTY, Ga. - Georgia State Troopers kept a promise to one of their lost colleagues and friends by walking his daughter to her first day of school.

The Georgia Department of Public Safety shared the photos on their Facebook page Wednesday morning of the emotional moment when two troopers walked 4-year-old Savannah to pre-kindergarten for the first time.

It was a promise they made to the late Trooper Tyler Parker, who was driving his personal vehicle when he was involved in a single-car crash on March 19, 2018. First responders believe Parker's truck hydroplaned as a line of powerful storms raced through the area.

Parker didn't survive the accident. He was laid to rest at a ceremony attended by then-Governor Nathan Deal, more than a hundred of his fellow troopers, and several hundred more friends and family.

Savannah, who was also in the car, sustained severe injuries and has made a full recovery.

In the photos, the two troopers hold Savannah's hands as she walks into the first day of school.

The GSP also shared a photo of Savannah standing by her father's patrol car and carrying his hat with a sign that said her favorite color (green), food (spaghetti), and more.