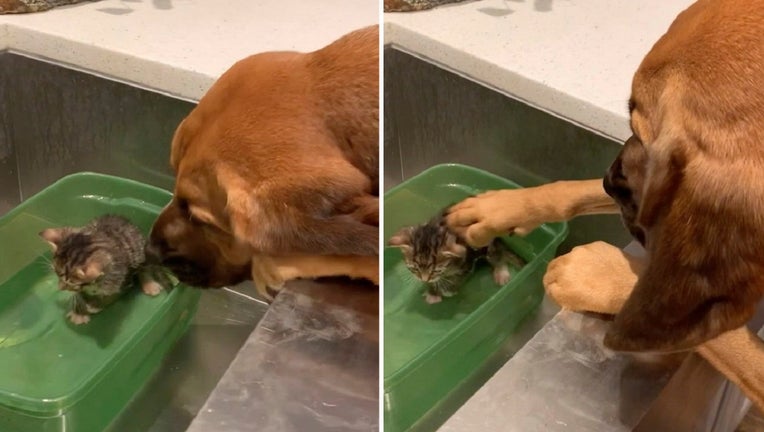 “Is that your baby you are you trying to pet?” Stephanie is heard asking in a video capturing the moment Ruby Jane affectionately pats Bodie with a paw bigger than the kitten’s head. (SPCA Florida)

Veterinary technician Stephanie Vice, 36, said her burly bloodhound, Ruby Jane, is extremely affectionate toward all the rescue kittens she and her husband, Matthew, 47, foster at their home in Lakeland, Fla.

The Vices have introduced Ruby Jane to more than 100 fostered furballs over the last few years — but now the 5-year-old rescue dog has her own special little baby.

“Is that your baby, Jane? Is that your baby you are you trying to pet?” Stephanie can be heard asking on a video capturing the moment Ruby Jane affectionately pats Bodie with a paw that’s bigger than the kitten’s head.

The vet tech posted her heart-warming video on social media last Thursday, and it’s since gone viral, racking up more than 8,600,000 views.

Stephanie and Matthew told Caters News they brought Bodie and his two siblings home from a local SPCA no-kill shelter to foster them until they are ready to be put up for adoption.

“Ruby Jane is a very playful dog and is very good with all of the foster kittens,” Stephanie said.

“In particular, she has become very fond of Bodie since we brought him home. These three kittens make 107 rescue animals that I have fostered in the last five years.”

Those interested in donating to the SPCA Florida may do so here.

This article originally appeared in the New York Post.