Biden asks Harris to ‘go easy on me, kid’

Former Vice President Joe Biden asked Sen. Kamala Harris, who has been on of his sharpest critics, to go easy on me, kid at the start of night two of the second set of Democratic debates in Detroit.

DETROIT - As night two of the second set of Democratic debates kicked off in Detroit on Friday, Joe Biden tried to keep things light with Sen. Kamala Harris by saying, “Go easy on me, kid.”

Harris, who has been one of Biden’s sharpest critics among the slew of Democratic candidates, shook hands with Biden at the start of the debate. That’s when Biden smiled and urged her to take it easy.

She smiled in return and called Biden by his first name. 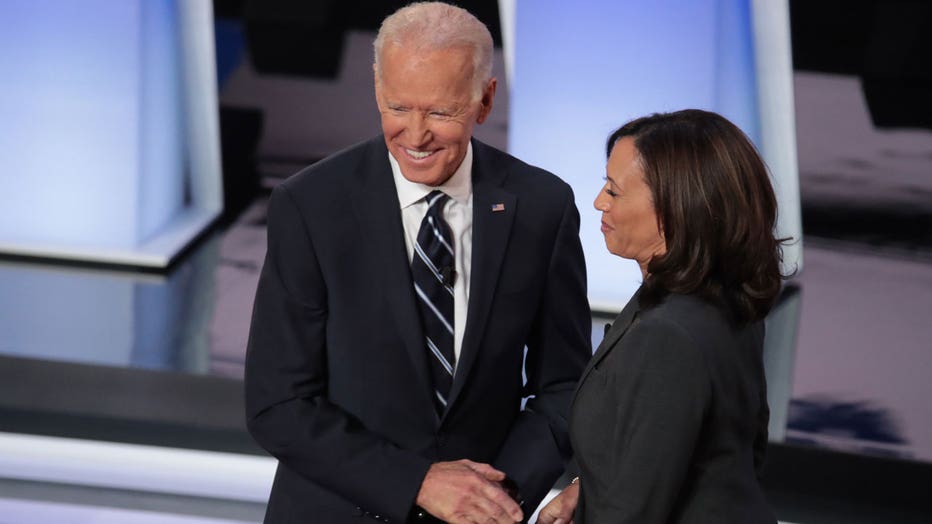 Former Vice President Joe Biden smiles as he shakes hands with Sen. Kamala Harris during the opening of night two of the second set of Democratic debates in Detroit, Michigan, on July 31, 2019. Photo by Scott Olson/Getty Images (Getty Images)

Their generational and racial differences were on display last month in the first debate. Harris, 54, hammered Biden for his opposition to federal court-ordered busing in the 1970s as a way to desegregate public schools.

She stated she didn’t believe the 76-year-old was a racist, but didn’t understand how he could oppose the idea, especially when she was one of the children who was bused to school in California.

Biden said he disagreed with segregationist senators on civil rights, but was still able to work with them in the Senate. He said Harris’ comments were a “mischaracterization of my position across the board.”

He also promised to defend his record more forcefully in Friday’s debate.