A senior trip to Punta Cana reportedly went south when the group of teen graduates and family members from Oklahoma became very sick while staying at a resort.

The recent Deer Creek High School graduates flew to the country on June 8 and stayed at the Hard Rock Hotel & Casino in Punta Cana, KOTV-TV reported. Around 60 people were in the group, which included at least 40 graduates and family members, according to the station.

Mother Liz McLaughlin told KOTV that her daughter, Libby, was among at least seven members of the group who became ill after eating at the resort's Japanese restaurant. 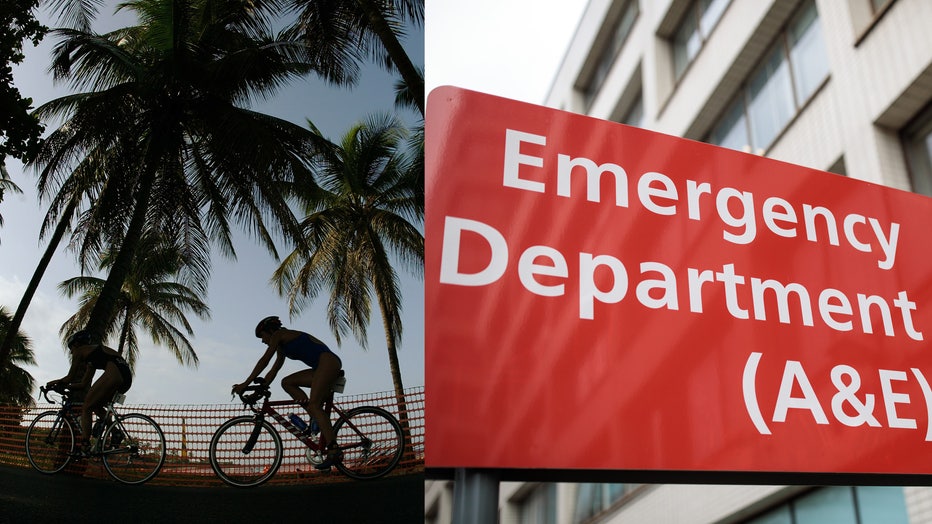 Triathlon competitors pass under palm trees in this 2003 file photo, alongside a file image of an emergency department sign. (Photos by Donald Miralle and Jack Taylor/Getty Images)

One of the teens, Bennet Hill, said that he started to feel very sick after dinner.

"I just woke up, and my stomach was cramping and I was sweating," Hill told KOCO-TV. "I was freezing."

Hill told the station that six others in the group suffered from the same symptoms and were rushed by ambulance to the hospital.

“We’ve been hooked up to IVs since we first got here with antibiotics, just getting hydrated, anti-nausea medicine,” Hill said.

While none of the cases have been linked, the group's reported illness occurred at the same resort where a U.S. tourist died earlier this year. Robert Bell Wallace, 67, of California, became ill almost immediately after he had a scotch from the room minibar, according to family, and died days later from unknown causes.

The Hard Rock Hotel & Casino Punta Cana said in a statement that it was “deeply saddened” by the incidents reported at the resort.

“Today, June 21, 2019, The Ministry of Public Health in the Dominican Republic has released further information on the American tourists who passed away in 2019, including autopsy findings that reveal these deaths were unrelated and from natural causes and pre-existing conditions,” a statement read in part. “We are deeply saddened by these unfortunate incidents, and extend our sincerest sympathy to the families of those affected.”

Hard Rock Hotel & Casino Punta Cana said the safety and health of its guests remains its “highest priority.” Although none of the incidents have been linked, the company has taken steps to “improve the experience and enhance safety” in the future, including removing liquor dispensers from all guest rooms and contracting a U.S. based healthcare facility to ensure the on-site health clinic is complying with all international and U.S. standards of care.

“The hotel has already been inspected by the Ministry of Public Health,” the statement continued. “We are also contracting a U.S. based 3rd party testing lab to provide inspections and laboratory testing of all food and beverage products and public spaces.”

Another large group from Oklahoma, a Jimmy Buffett fan club, traveled to the Dominican Republic in April and several members fell ill, suffering from headaches, vomiting, fever, diarrhea and chills. Two members from the group later tested positive for salmonella upon their return home after seeing doctors, the group's travel agent said.

The illnesses also come amid reports of a number of tourist deaths in the Dominican Republic over the past year.