The Enrichmond Foundation hopes to restore Historic Evergreen Cemetery to its former glory, but it needs volunteers to help clean up the 40-acre property.

RICHMOND, Va. - In honor of Black History month, which begins Saturday, a non-profit organization is seeking volunteers to help with a weekly clean-up initiative at Historic Evergreen Cemetery in Richmond, Virginia, the resting place of many of the city’s civil rights heroes and other African-American leaders of the 19th and 20th centuries.

In Richmond’s East End, Historic Evergreen Cemetery is the resting place of figures such as Maggie L. Walker, a businesswoman and community leader who was the first African-American woman in the United States to found a bank; John Mitchell, Jr., a newspaper editor, politician, banker and civil rights activist; and Rev. J. Andrew Bowler, an ordained minister who helped organize the first school for African Americans on Richmond’s Church Hill, where he taught for more than 50 years.

The call for volunteers comes from the Enrichmond Foundation, an umbrella non-profit organization that encompasses more than 80 volunteer groups that support Richmond’s government agencies by “activating citizen involvement, education and fundraising.” One of the non-profit’s focuses is the conservation of Richmond public spaces, such as the Historic Evergreen Cemetery and its neighbor, the East End Cemetery. 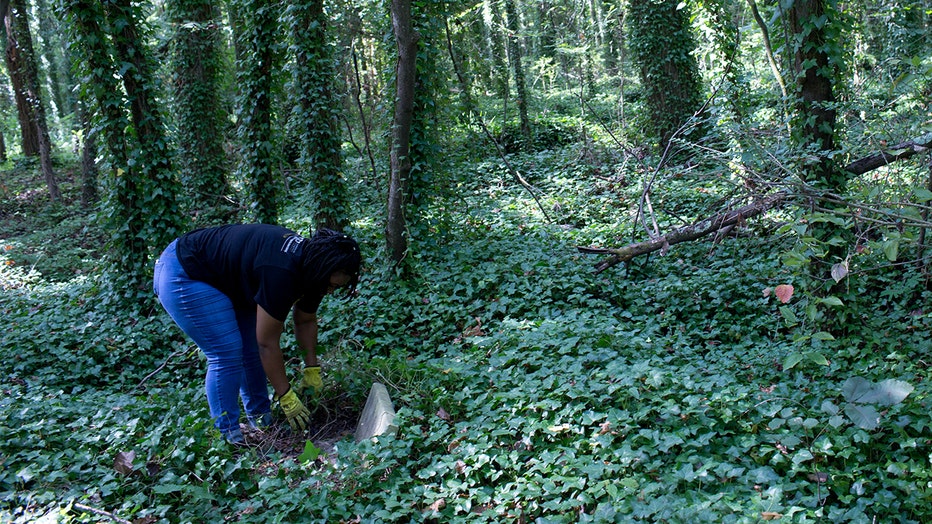 FILE: Volunteers help to clean up and remove overgrowth in Richmond's East End cemetery, an historical black cemetery that is located directly beside Historic Evergreen Cemetery. Both cemeteries were so neglected by the city that many of the graves h ((Photo by Andrew Lichtenstein/Corbis via Getty Images))

Historic Evergreen Cemetery was founded in 1891, but neglect over the past few decades has left many of the plots and tombstones overgrown.

The Enrichmond Foundation elaborates on how the beloved cemetery fell into disrepair:

Though the cemetery’s owners hired staff to care for the cemetery through the years, much of the care/repair of individual gravesites fell to families, who maintained the resting places of loved ones for decades, and in some cases continue to do so today. With so many Richmonders, particularly young men and women, moving to northern cities as part of the Great Migration during the WWI era and beyond, there were fewer family members present to care for plots at Evergreen. In time, many of the traditional gatherings at Evergreen (including Memorial Day clean-ups and picnics) no longer took place, and the site’s deteriorating infrastructure made it increasingly difficult for families and visitors to navigate overgrown walkways and roads.

There are an estimated 10,000 plots in Historic Evergreen Cemetery, which stretches across 40 acres.“Your volunteer time is crucial to the success of this project as we reclaim and maintain the cemetery,” the organizers of the events said.