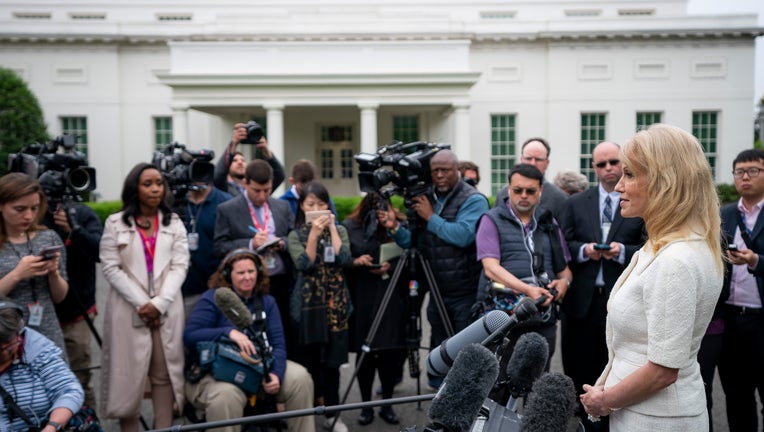 WASHINGTON - The House Oversight Committee on Wednesday approved a subpoena to force White House counselor Kellyanne Conway to appear before the panel as it looks into allegations that she repeatedly violated a federal law that limits political activity by government workers.

Conway did not show up at a hearing Wednesday, after the White House said Monday it would not allow her to appear . The Democratic-led panel voted 25-16 to issue a subpoena.

Rep. Elijah Cummings, D-Md., the panel's chairman, said Conway's actions were a clear-cut violation of the law and that President Donald Trump should fire her.

"This is about right and wrong. This is about the core principle of our democracy that no one in this country is above the law, not even Kellyanne Conway," Cummings said.

The U.S. Office of Special Counsel, which is unrelated to special counsel Robert Mueller's office, said earlier this month that Conway has been a "repeat offender" of the federal Hatch Act by disparaging Democratic presidential candidates while speaking in her official capacity during television interviews and on social media.

Federal law prohibits executive branch employees from using their official authority or influence to affect the result of an election. President Donald Trump and Vice President Mike Pence are exempt from the Hatch Act, but there are no exceptions for White House employees.

Conway, a frequent presence on radio and TV, is being "targeted because she is good at what she does," said Ohio Rep. Jim Jordan, the panel's senior Republican.

Instead of focusing on issues that matter to Americans, Democrats "want to focus on Kellyanne's tweets," Jordan said, noting that senior advisers to former President Barack Obama also frequently appeared on TV and offered opinions on political matters.

"What we have here is a political spectacle," said Rep. Mark Meadows, R-N.C.

Cummings responded that Republicans had "gotten to the point, sadly, where breaking the law is OK."

"It is not breaking the law," Meadows shot back.

Special Counsel Henry Kerner, a Trump appointee, said the Hatch Act's restrictions on political activity were reasonable. Without the law, partisan actions by government employees "could quickly multiply and severely damage the public's confidence in the nonpartisan operation of government," he said.

Referring to Conway, Kerner said her "egregious and repeated Hatch Act violations, combined with her unrepentant attitude, are unacceptable from any federal employee, let alone one in such a prominent position."

Conway's conduct "hurts both federal employees, who may believe that senior officials can act with complete disregard for the Hatch Act, and the American people, who may question the nonpartisan operation of their government," Kerner said.

Kerner recommended June 13 that Trump fire Conway, saying that Conway's violations, "if left unpunished, send a message to all federal employees that they need not abide by the Hatch Act's restrictions."

Trump has said he will not fire Conway , one of his most unwavering defenders. Conway is known for her fiery television appearances in support of Trump and his policies. She helped him win election in 2016 as his campaign manager.

The recommendation to fire Conway is the first time the watchdog office has recommended the removal of a White House official over Hatch Act violations.

Conway has dismissed reports of possible Hatch Act violations, saying critics were merely trying to silence her because "they don't know how to beat (Trump) at the ballot box."

She told "Fox & Friends" Monday that Democrats and other critics "want to put a big roll of masking tape over my mouth because I helped, as a campaign manager ... the president and the vice president."

Instead of testifying to Congress Wednesday, Conway accompanied Trump to a Washington hotel, where he was addressing the Faith & Freedom Coalition's annual policy conference.