Historians estimate that up to 1.5 million Armenians were killed around World War I, and many scholars see it as the 20th century's first genocide.

WASHINGTON, D.C. - The House has voted overwhelmingly to recognize the century-old mass killings of Armenians by Ottoman Turks as genocide. The move is a clear rebuke to NATO ally Turkey in the wake of its invasion of northern Syria.

Historians estimate that up to 1.5 million Armenians were killed around World War I, and many scholars see it as the 20th century's first genocide. Turkey disputes the description, saying the toll has been inflated and considering those killed victims of a civil war.

The nonbinding resolution passed 405-11 Tuesday. American lawmakers have been critical of Ankara's recent incursion against the Kurds along the Turkish-Syrian border.

Rep. Adam Schiff spoke on the House floor following the vote, saying that it was a vote that he “fought for 19 years to make possible, that tens of thousands of my Armenian American constituents have waited decades to see,” later adding that, “the facts of the genocide are horrific and undisputed by historians.”

More than a century after the Armenian genocide began, Schiff said it is now “our solemn responsibility to remember those who were lost, to seek justice and restitution, and to educate Americans and those around the world about the crime of genocide.”

Speaker of the House Nancy Pelosi called the Armenian genocide “one of the great atrocities of the 20th century.”

“Today, let us clearly state the facts on the floor of this House to be etched forever into the Congressional record, the barbarism committed against the Armenian people was a genocide,” Pelosi said. “As international observers wrote at the time, ‘it was a campaign of race extermination,’ one that we as members of Congress and as freedom-loving people have a moral obligation to never forget.”

“If we ignore history, then we are destined to witness the mistakes of the past be repeated,” Pelosi continued. “The recent attacks by the Turkish military against the Kurdish people are a stark and brutal reminder of the danger in our own time.”

California Rep. Anna G. Eshoo recalled her personal family history in a statement following the resolution’s passing, saying, “This is deeply personal for me. I’m the only member of Congress of Armenian-Assyrian descent.”

“Some of you know that I have members of my own family that were among those that perished, And my parents fled with theirs to America," Eshoo continued. "As my father said, ‘The best idea that was ever born was America.’"

Many celebrities also chimed in on social media to acknowledge and celebrate the passage of the resolution, including Kim Kardashian West, who is Armenian-American and has long been vocal about the importance of the recognition.

Rep. Ilhan Omar was the one Democrat who did not vote to support the resolution, choosing instead to vote “present.” She has come under fire for her take.

“I believe accountability for human rights violations — especially ethnic cleansing genocide — is paramount,” Omar said in a statement to CNN. “But accountability and recognition of genocide should not be used as a cudgel in a political fight.”

Turkey on Wednesday condemned the resolution passed by the U.S. House of Representatives. 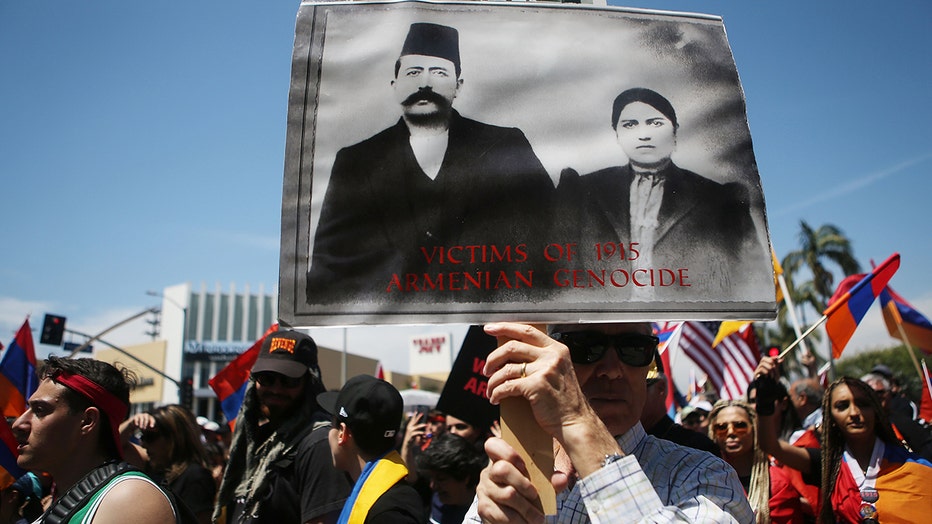 Turkey disputes the description of mass deportations and killings of Ottoman Armenians in 1915 as genocide and has lobbied against its recognition in the U.S. for years. It has instead called for a joint committee of historians to investigate the slayings.

"We are saddened that a slander against our country is being accepted by a country's parliament," he said and added, "we would consider this accusation the biggest insult towards our nation."

The step to consider the events as genocide "does not count for anything," Erdogan argued, saying American lawmakers had acted "opportunistically" to pass the bill at a time when Turkey is being widely criticized for its incursion into Syria.

Turkey's cross-border military offensive against Syrian Kurdish fighters, which Ankara says is necessary for its national security, began Oct. 9 after months of Turkish threats and a sudden decision by U.S. President Donald Trump to withdraw troops and abandon his Kurdish allies against the Islamic State group. Trump's move was widely criticized by both Republicans and Democrats.

The second bill sanctioning Turkey shows the bipartisan disapproval of Trump's decision and condemns Turkey's offensive. The measure would bar most U.S. weapons sales to Turkey and slaps sanctions on foreigners attempting to send the Turks military equipment. It would also block high-ranking Turkish officials from their assets in the U.S. and restrict their travel.

"We will never accept those who attack Turkey and myself for the sake of supporting the PKK, which is a terror organization," Erdogan said.

He was referring to the Kurdistan Workers' Party, which has waged a 35-year armed insurgency in Turkey's southeast and eastern regions. The Syrian Kurdish forces are linked to the group and follow the same ideological leader, Abdullah Ocalan, who is imprisoned in Turkey.

Turkey halted its military operation into Syria through two separate cease-fires brokered by the U.S. and Russia to allow the Kurdish fighters to withdraw 30 kilometers (19 miles) away from the Turkish border but Erdogan renewed threats to resume the operation if promises weren't fulfilled.

Turkey and allied Syrian fighters now control a portion of the previously Kurdish-held border zone, as Russian and Syrian government troops move into the rest of the areas following a deal with the Kurdish force.

Turkey's foreign ministry criticized American lawmakers, saying it would be wrong for them to take their "vengeance"for Turkey's Syria offensive through the Armenian genocide bill.

"Undoubtedly, this resolution will negatively affect the image of the U.S. before the public opinion of Turkey," the ministry said.

Both bills, passed Tuesday, were a sign of further deterioration in Turkish-American relations, which have been strained over multiple issues, especially U.S. support for Syrian Kurdish fighters who fought against Islamic State militants but who are considered terrorists by Ankara.

One Turkish retiree in Istanbul echoed the government's condemnation."How are we the ones doing the genocide?" asked 81-year-old Selami Orbasi, who noted the Ottoman Empire was attacked from all sides during World War I.

"America is doing the real genocide," he added. "How did they do it? They broke up Iraq, they attacked Syria for their oil, they created a Kurdish state."