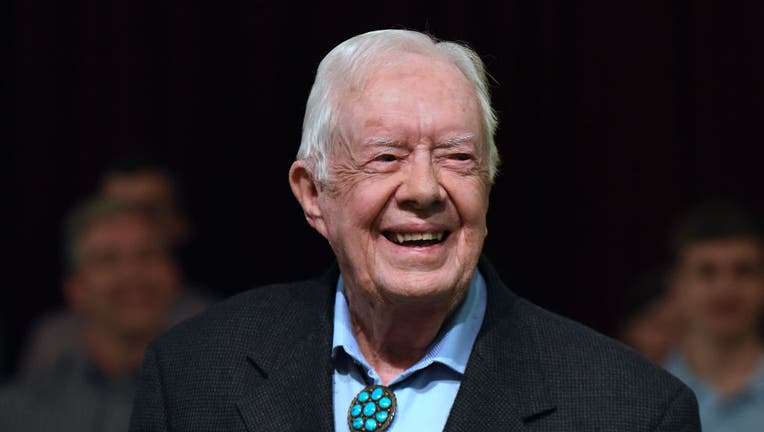 Former President Jimmy Carter speaks to the congregation at Maranatha Baptist Church in his hometown of Plains, Georgia. (Paul Hennessy/NurPhoto via Getty Images)

ATLANTA - Former President Jimmy Carter turns 96 on Thursday and you can help him celebrate with a birthday wish.

The Carter Center, the not-for-profit organization founded by Carter and former First Lady Rosalynn Carter in 1982, is encouraging people to send in a birthday message to help the oldest living former president celebrate.

"President Carter's birthday is TOMORROW! Our hearts are full with the kind and inspiring messages from around the world," the Center wrote on Twitter.

Birthday messages and photos can be submitted on the Carter Center's special board. So far, people from as far away as Austria and Uraguay have joined in the celebration.

Not too many presidents have lived into their 90's. The list includes Carter himself, George H.W. Bush, John Adams, Herbert Hoover, Ronald Reagan, and Gerald Ford.

This year, Jimmy and Rosalynn Carter celebrated their 74th wedding anniversary, making them the longest-married presidential couple in American history.

In recent years, Carter has been hospitalized multiple times for a fractured pelvis, brain surgery, and a urinary tract infection. Despite all the health scares, the former president continues to teach Sunday school classes at his church in Plains, Georgia.