Joshes gather to brawl over the right to their name

Dozens of people named Josh met in Lincoln, Nebraska, to hold a battle over their name on April 24. (Credit: Grey Estelle via Storyful)

LINCOLN, Neb. - Hundreds of people went to battle Saturday for the right to be the true Josh.

The winner, not surprisingly, was Josh — Tiny Josh, to be more specific. The 5-year-old boy was coronated with a Burger King crown after a massive pool-noodle fight.

Joshes from all over the country flocked to Air Park in Lincoln for Saturday’s Battle of the Joshes. Video captured by spectators shows Joshes in Spider-Man costumes while another came dressed like a Spartan.

Spectators chanted "Josh, Josh, Josh" as they took turns swinging the foam weapons at one another. 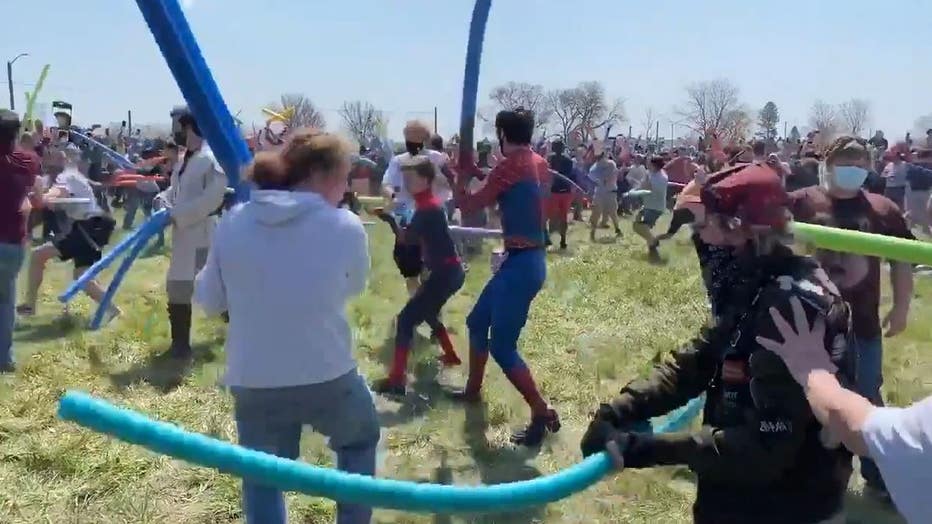 Spectators chanted “Josh, Josh, Josh” as they took turns swinging the foam weapons at one another. (Credit: Yousef Nasser - KLKN-TV via Storyful)

The event’s origins date back to last year when Josh Swain, a 22-year-old college student from Arizona, became overwhelmed with boredom amid the COVID-19 pandemic.

He messaged other Josh Swains on social media, challenging them to a duel over the right to his name. His antics went viral and created Saturday’s madness.

Swain took on another Josh Swain, from Nebraska, in a "grueling and righteous battle of Rock, Paper, Scissors." The Arizona student won that battle, allowing him to claim the title of the true Josh Swain.