FOX 29's JoAnn Pileggi is live at Philadelphia Police Headquarters with the latest on the murder of a Philadelphia officer's son.

During a Tuesday press conference, authorities shared a new video compilation that showed the moments leading up the shooting that killed Hyram Hill Jr.

The new video also contained images of two suspects. Police say those suspects, who they believe sell narcotics near Broad Street and Erie Avenue, were also on the scene of a domestic incident about 10-15 minutes before Hill was shot.

One of the suspects was interviewed by police on the scene of the domestic incident and was recorded on police body camera video. The initial call, which came in around 4:15 a.m. on Jan. 24, was for a report of a person breaking into a residence.

When police arrived on the scene, police say one of the suspect’s in Hill’s murder remained in the passenger seat of a 2015 Kia Forte that was reported stolen two days prior to Hill’s murder. The second suspect was captured on responding officer’s body cameras as he was interviewed regarding the domestic incident. 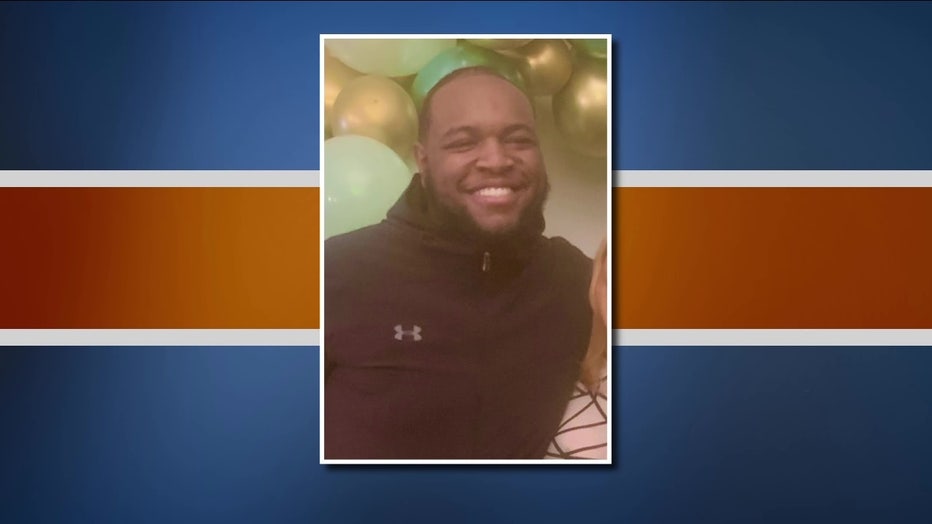 After the interview, police say everyone involved dispersed, and the suspects went North on Broad Street in their vehicle.

About 15 minutes later, video from the scene where Hill was shot shows him walking up to the window inside of a mini-market at Broad Street and Allegheny Avenue.

Within a minute, the suspects arrive on the scene in the stolen Kia - which they parked nearby on Rosewood Street.

Police give descriptions of two suspects in the murder of Hyram Hill Jr.

One of the suspects got out of the car and approached Hill at the mini-market and engaged him in a brief conversation. Captain Smith says Hill attempted to ignore the suspect, as he was on the phone with his girlfriend at the time.

Police say the suspect then abruptly opened fire on Hill through his jacket pocket. Hill turned and attempted to flee down Allegheny Avenue, where he ran into the second suspect.

The second suspect also opened fire on Hill, forcing him to run out into the street, where he collapsed.

The suspects gathered around Hill, where police say they presumably removed items from his pockets, and then fled in the stolen Kia.

Police say the stolen Kia, along with Hill’s phone, and a firearm he owned have not yet been recovered.

Investigators have previously stated they believed the shooting may have stemmed from a robbery.

A short time after the incident, the Philadelphia District Attorney’s Office identified Hill, the son of a veteran Philadelphia police officer, as the victim.

Hill’s mother, Edwenna Ferguson, spoke out about her son’s murder following the incident.

'My son was not exempt': Philadelphia police officer opens up about son's murder

Edwenna Ferguson, a 17-year veteran of the Philadelphia Police Department, spoke Tuesday about the murder of her son 24-year-old Hyram Hill Jr. According to investigators, Hill was shot multiple times on the 1400 block of West Allegheny Avenue around 4:30 a.m. Monday. Investigators believe the shooting may have stemmed from a robbery.

"There's nothing I can say bad about that boy," Ferguson said, fighting through tears. "And they all, when they get older, they do things that you don't agree with, but I was proud of everything my son did."

Hyram, a graduate of West Catholic High School in West Philadelphia, worked full time at VisionQuest in Delaware as a mentor for troubled teens, according to his mother. He was two semesters from graduating with a bachelor's degree from Cheyney University in Delaware County.

He played football in high school and at Jireh Prep in North Carolina with aspirations of one day making it to the NFL, Ferguson said. She recalled how much her son respected her, noting that he did get any tattoos because he knew she did not want him to.

Friends told FOX 29 that Hyram was about to become a father.

A reward of at least $30,000 was offered for information leading to an arrest and conviction in the case.