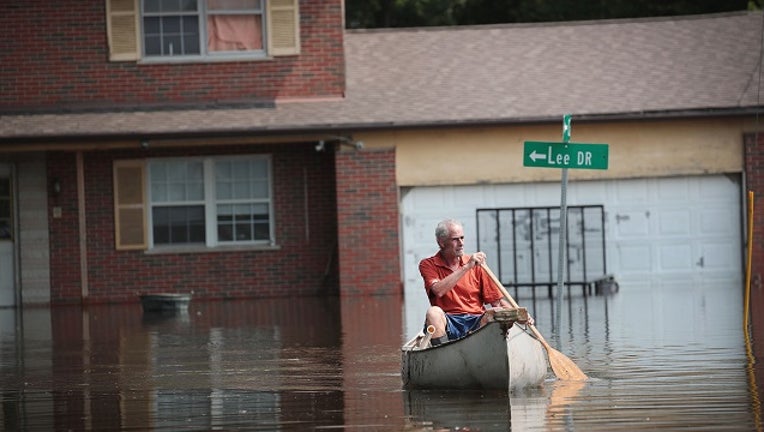 Warren Ryan canoes through floodwater from the Mississippi River to get to his home on June 1, 2019. (Photo by Scott Olson/Getty Images)

Crews were making a "last ditch effort" on Saturday to save low-lying parts of a small Arkansas city from floodwaters pouring through a breached levee, and authorities downstream were warning people to leave a neighborhood that sits across the swollen river from the state capital.

Further north in Iowa, a flood barrier along the swollen Mississippi River failed Saturday, flooding four to six blocks of downtown Burlington, a city of about 25,000 people that is 170 miles (274 kilometers) southeast of Des Moines.

On Friday, the Arkansas River, which has been flooding communities for more than a week, tore a 40-foot (12-meter) hole in a levee in Dardanelle, a city of about 4,700 people roughly 100 miles (160 kilometers) upstream from Little Rock.

Mayor Jimmy Witt said Saturday that officials don't believe a temporary levee being constructed will stop the water from flooding the south side of Dardanelle, but he hopes it will buy time for residents of up to 800 threatened homes to prepare.

"We have started a last ditch effort to try and protect the southern borders of the city," he said at a news conference.

The river has been widening the levee breach and floodwaters have been slowly approaching homes, officials said. Water from some creeks and tributaries has already flooded some houses, they said. Yell County Judge Mark Thone said flooding has surrounded about 25 people in a rural community a few miles south of Dardanelle, and several roads have closed due to high water.

Meanwhile in North Little Rock, which is just across the Arkansas River from Little Rock, officials were going door-to-door Saturday to tell people in the Dixie Addition neighborhood to consider leaving.

The river isn't expected to crest in the Little Rock area until Tuesday, but North Little Rock officials said on Facebook that they believe the river will back up storm drainage areas and cause roads to become inaccessible in and around Dixie Addition, possibly for more than a week.

City spokesman Nathan Hamilton said there are about 150 homes covered by the evacuation recommendation. He said other homes also could be affected by flooding, but officials were currently focusing on only the most pressing neighborhood.

The evacuation recommendation followed a false alarm overnight that a nearby levee had breached and that flash flooding was possible. Officials quickly reversed themselves, though, and said that it hadn't failed and wasn't in danger of doing so.

"Obviously the breach in Dardanelle is a sign that there could be more of these breaches that will happen as the pressure continues to mount in the coming days," Hutchinson said.

The Arkansas River isn't the only one causing problems in the region.

In Burlington, Iowa, officials confirmed that a large, sand-filled barrier failed Saturday afternoon, forcing some businesses in the downtown area to evacuate. The National Weather Service issued a flash flood warning for the area until 10 p.m. Saturday.

Parts of the tiny northwestern Missouri town of Levasy were under water Saturday after a levee breach along the Missouri River. Officials there were conducting water rescues by boat, but no injuries were reported.

Officials in Illinois issued an "urgent plea" to residents of river communities to prepare for potential evacuations. The state's Emergency Management Agency director, Alicia Tate-Nadeau, called flooding a "life-safety issue," and the agency said levees along the Illinois River were in critical condition.

Flooding along the Missouri River in central Missouri prompted officials to issue a mandatory evacuation order Friday for some residents of Howard County, where the river had topped a levee. A topped levee along the Mississippi River, in northeastern Missouri, flooded several thousand acres of farmland Thursday.

In Oklahoma, water levels continued to drop as residents who were forced from their homes made plans to return. The weather service reported that the Arkansas River in Tulsa dipped below flood stage for the first time since flooding began.