FOX 29's Dave Kinchen has reaction from fans who watched the Eagles lose their first game of the 2021-2022 NFL season.

PHILADELPHIA - Jimmy Garoppolo threw one touchdown pass and ran in for a score, leading the San Francisco 49ers to a 17-11 victory over the Philadelphia Eagles on Sunday.

Nick Bosa had two sacks and San Francisco’s stingy defense shut down Jalen Hurts a week after Philadelphia dominated Atlanta in a 32-6 win.

The 49ers (2-0) return home after practicing all week at The Greenbrier resort in West Virginia with a pair of road wins on the East Coast to open the season.

The Eagles (1-1) got a reality check in coach Nick Sirianni’s first home game.

A sellout crowd greeted the Eagles for the first time since a playoff loss to Seattle on Jan. 5, 2020. With COVID-19 restrictions lifted, fans were tailgating six hours before kickoff. One guy brought a 49ers helmet and walked it around a parking lot on a dog leash. White "Go Birds" T-shirts were placed on every seat inside the Linc, though it was a sea of green once the stadium filled up.

They had little to cheer after the defense held the 49ers to three straight three-and-out possessions to start the game.

San Francisco’s offense finally got going after its own strong defensive stand. Garoppolo drove the 49ers 97 yards on 12 plays, capping it with an 11-yard TD pass to Jauan Jennings — his first career catch — for a 7-3 lead in the final minute of the first half.

The drive began after Philadelphia missed a huge opportunity to go up 10-0. After Hurts connected with Quez Watkins for a 91-yard gain to the Niners 6, the Eagles had a first down at the 1 following a pass interference penalty on Josh Norman. But, on fourth down from the 3, wide receiver Greg Ward took a flip on a reverse and threw an incomplete pass to Hurts in the back of the end zone. Ward was a quarterback in college. 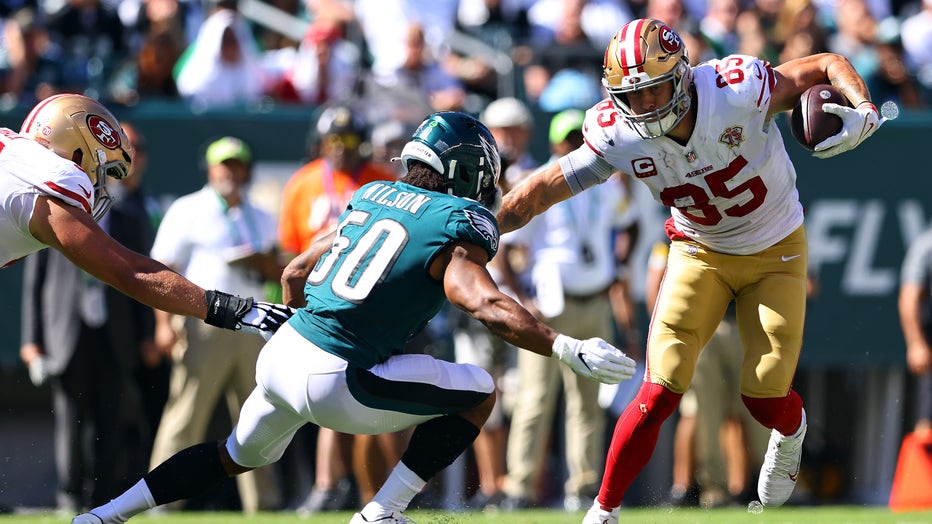 PHILADELPHIA, PENNSYLVANIA - SEPTEMBER 19: Tight end George Kittle #85 of the San Francisco 49ers looks to avoid a tackle by linebacker Eric Wilson #50 of the Philadelphia Eagles during the second half at Lincoln Financial Field on September 19, 2021

After Hurts scored, Miles Sanders ran in for the 2-point conversion. But the Eagles didn’t get the ball back.

Hurts threw a 38-yard TD pass to Jalen Reagor that was overturned because the 2020 first-round pick stepped out of bounds before he made the catch down the right sideline.

A large group of 49ers fans attempted to take over the Rocky statue at the Philadelphia Art Museum on Saturday night. They raced up the steps, waived Niners banners and tried place a banner on Sylvester Stallone’s bronze likeness.

49ers: Host the Green Bay Packers in their home opener next Sunday night.