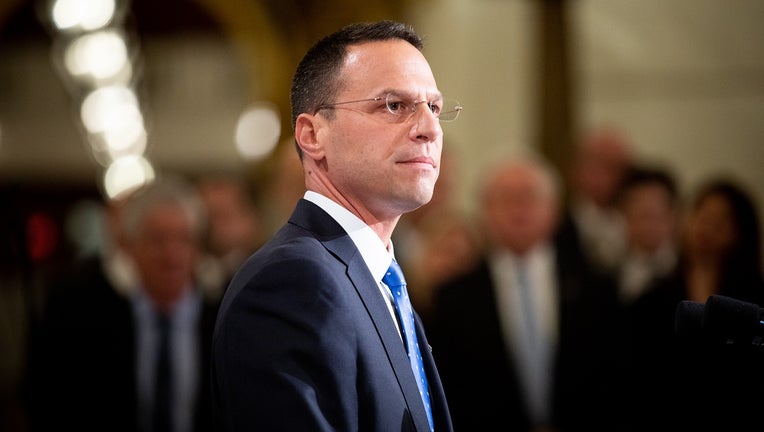 HARRISBURG, Pa. - Pennsylvania's high-profile attorney general, Josh Shapiro, will formally announce his candidacy for governor on Wednesday, entering the 2022 race months after making his intentions known and effectively clearing the field of potential rivals for the Democratic nomination.

Shapiro, a familiar presence on cable TV news who has spent nearly two decades in elective office, will launch a bid to become the state's chief executive with a speech in Pittsburgh, campaign communications director Will Simons confirmed to The Associated Press on Monday.

The 48-year-old is a self-described progressive who led a nationally prominent investigation into sexual abuse of children by clergy and who further raised his political profile by pushing back against Donald Trump's effort to overturn his presidential election loss last year.

He served as a state representative and chair of the Montgomery County commissioners board before winning election as the state's top prosecutor in 2016 with no law enforcement background and little practical courtroom experience.

If he gets the Democratic nomination, it’s far from clear whom Shapiro would face in the fall 2022 election. The large and growing pool of potential and declared GOP candidates seeking their party’s nod includes state senators, business leaders, a former congressman and others.

Shapiro has benefited from a close relationship with Gov. Tom Wolf, a fellow Democrat who is constitutionally barred from running for a third term. Shapiro has Wolf's endorsement and so far has the Democratic field to himself, having shown himself to be a formidable fundraiser in two successful statewide runs for office. He had $2.7 million in his campaign account at the beginning of 2021.

He was reelected by 4.5 percentage points against an opponent with little name recognition or campaign cash. After securing his own victory, he helped lead the PR and legal charge — both on television and in court actions from Pennsylvania to the U.S. Supreme Court — against baseless claims by Trump and his allies that Democrats had somehow cheated to victory in the presidential election.

Those claims built the foundation for what Republicans now call a "forensic investigation" into the 2020 election, drawing a court challenge from Shapiro's office over subpoenas issued to state election officials by a Republican-controlled Senate committee.

State Republican Party officials have long accused Shapiro of using the attorney general’s office to boost his political ambitions, particularly in his legal battles with Trump, and have sought to tie him to Philadelphia’s rising murder rate. In a state that is closely divided between the two major parties, next year's governor's race is certain to be hard fought.

Shapiro’s tenure as attorney general produced the groundbreaking grand jury report in 2018 on the cover-up of child sexual abuse in six of Pennsylvania’s Roman Catholic dioceses. The report spawned more than 20 similar investigations in other states and stronger laws in Pennsylvania, and helped prompt the nation’s bishops to approve new steps to deal more strongly with sexual abuse by clergy.

Shapiro's office went to court to challenge Trump administration policies more than 40 times, by its own count — almost always as part of a coalition of Democratic-led states — and won nearly every time, Shapiro's office said.

Also on the national stage, Shapiro’s office helped lead state attorneys general in settlement talks with big pharmaceutical distributors and major drug manufacturers over their liability for the opioid addiction crisis in the United States.

Shapiro ran for attorney general promising to hold what he called the "frackers" accountable, although his record of taking on the state's huge natural gas drilling industry is mixed.

His office issued a grand jury report slamming how gas drilling is regulated, and criminally charged a drilling company and a pipeline developer. Another driller pleaded no contest and paid $150,000 in penalties.

Shapiro let yet another gas company settle a lawsuit over royalties for $5.3 million in restitution — a fraction of what landowners say they were cheated out of — though he extracted a promise for higher future payments. He also lost a bid in court to sue exploration firms on consumer protection grounds over their mineral rights-leasing practices.

He has generally avoided the third rail of gun control politics as a means to to fight gun violence, and instead drummed up his office's efforts to trace guns used in crimes, break up gun-trafficking rings and subject so-called "ghost guns" to state regulations.

Shapiro and his wife, Lori, have four children and live in the Philadelphia suburb of Montgomery County. A graduate of the University of Rochester and Georgetown Law, he worked as a congressional staffer before launching his own political career in 2004.