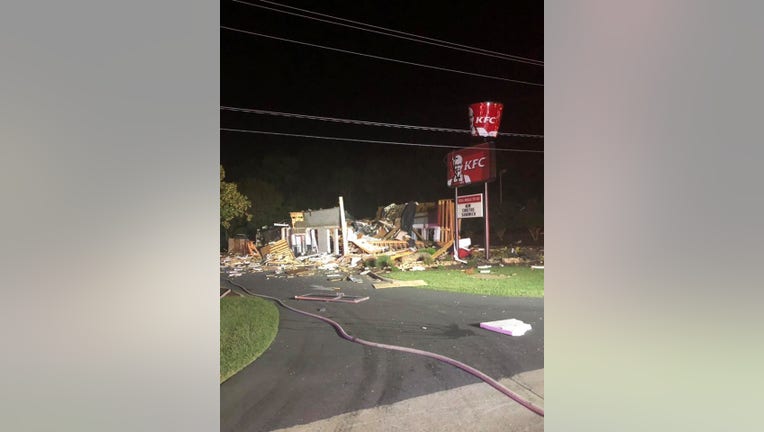 FOX NEWS - The employees of a North Carolina KFC are likely thanking their finger-lickin’ stars that no one was hurt when the restaurant exploded early on Thursday morning.

The KFC, located in Eden, exploded at around 12:35 a.m., shortly after employees closed up the eatery for the evening, the Eden Police Department said.

Police also learned that employees smelled gas when closing the store and the manager called the gas company before locking up.

Surveillance footage taken from nearby businesses show the exact moment of the explosion. Many of the neighboring stores were also damaged in the blast, according to Fox 8.

Police later confirmed that no one was injured.

"We've actually searched the building and no one is inside the building, which is great," said Eden Police Chief Greg Light, who added that he was two miles away at the time of the explosion, but still felt the blast.

Fox 8 reporter Daniel Pierce added that the explosion was so strong, it launched what appeared to be the drive-thru window approximately 50 feet from the restaurant.

“We are devastated by this incident, but most importantly we are grateful that all of our restaurant team members are safe and no one was injured. We would like to thank the Eden police and fire crews, for their response and continued support. We are cooperating directly with the investigating agencies as they work to determine the cause.”

A subsequent statement confirmed that displaced employees will temporarily work at nearby locations until the Eden KFC is rebuilt.

"The franchisee organization for this restaurant places the safety and care of its employees as its top priority. They are actively placing the impacted team members at their choice of six area KFC restaurants to minimize disruption to their work schedules and pay while the Eden location undergoes rebuilding. In addition, the KFC Foundation’s Family Fund will be providing additional assistance to eligible employees to help with transportation and other expenses," the fast-food chain confirmed.

Locals have also expressed their gratefulness that no injuries were reported on Facebook, with some claiming they, too, felt the blast from miles away.

"I am clear down in Draper and felt it and heard a loud boom. That is several miles from us. I thought a big branch had come down on the house," one person said.

"This explains why our whole house shook. We live about 1 mile from this scene. Prayers for all those affected by this tragic event." another added.

The Eden Police Department said on Facebook that roads surrounding the KFC were temporarily closed following the explosion.