Teen speaks out after contracting COVID-19

LAKEWOOD, Calif. - A 16-year-old boy from Lakewood with no underlying health conditions endured a difficult battle with COVID-19, and is sharing his story to raise awareness about the virus.

Pierre St. Julian went to Lakewood Regional Hospital after experiencing a fever, a headache, and eye irritation. He was diagnosed with COVID-19 and was transferred to Long Beach Medical Center.

"I was scared because I didn't really know what was happening, and my eyes were burning. I couldn't really see," said Pierre.

His symptoms got worse, according to his mother, Colette Griffin-St. Julian. Pierre's eyes got red, his lips swelled, and he developed a rash.

Colette said doctors believe Pierre possibly developed Steven Johnson syndrome and MIS-C. According to the Centers for Disease Control and Prevention, MIS-C, or Multisystem Inflammatory Syndrome in Children, is a "rare, but severe condition that has been reported approximately 2-4 weeks after the onset of Covid-19 in children and adolescents."

"They [doctors] were looking into those diseases, but they still never gave us a final answer of which one. They still don't really know. They tested him for everything like all types of things, and everything was negative. Only thing that was positive was COVID," said Colette.

"None of us wore masks because we were around family and people don't realize, it's not strangers that you get it from. You can get it from family, anyone," said Colette.

"When I woke up, I couldn't get out of bed like my body was just hurting. It felt like I got run over by a truck. My head was hurting, body aching," said Colette.

Colette's symptoms lasted for about five days, but her mother-in-law, Tina Davis, who was also at the party, ended up passing from the virus. Davis was 57 years old and had cancer.

"Her cancer was doing fine, but Covid took her out. It really changed our lives because we weren't even able to be there for our mother in law, his grandmother [Pierre's grandmother] because we were in there [the hospital] experiencing the situation with him [Pierre]," said Colette.

While Pierre battled the illness, Colette said she felt helpless because she wasn't able to help her son, and there were no answers.

"I was in a lot of pain for him like I wish I could have took the pain instead of him. I was trying to stay strong for him. I went in the bathroom a couple of times and cried because it was nothing I could do and they didn't know what to do and it was hard. I just prayed," said Colette. 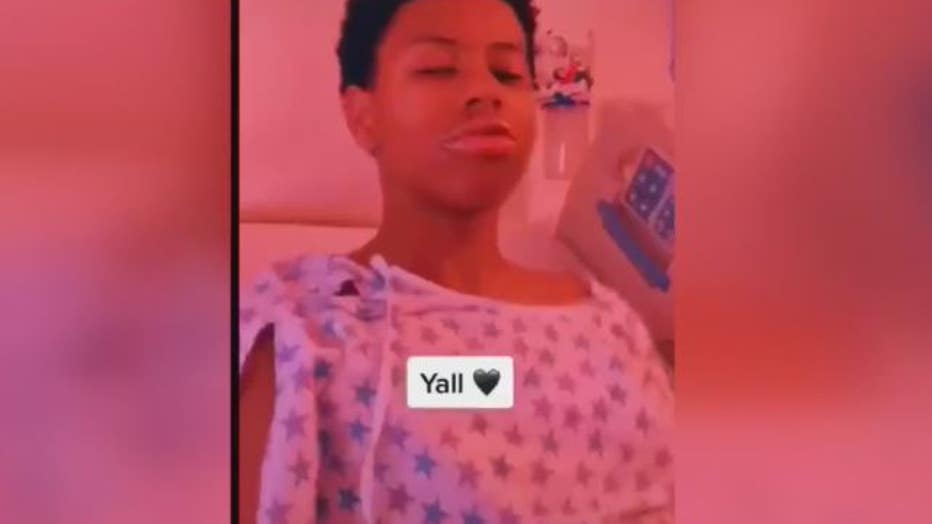 Pierre made a TikTok video to lift his spirits while he was in the hospital, and to raise awareness about kids getting the virus. The video got 8.5 million views, according to Pierre.

"To try to get the pain off my mind, I tried to make a TikTok and then it kind of went viral," he said.

The family wants people to be aware of the impacts of COVID-19 and encourage others to practice social distancing and wear masks.

"I just say continue to wear your mask around family, friends, it doesn't matter who, and just take this thing serious — because it's really serious," said Colette.

Pierre still has side effects from COVID-19 with blurred vision. He is continuing to take aspirin, eye drops and steroids though he is no longer testing positive for COVID-19, and was released from the hospital on August 5. He regularly sees a cardiologist to monitor his heart, an infectious disease doctor, and an eye doctor regarding his vision problems.