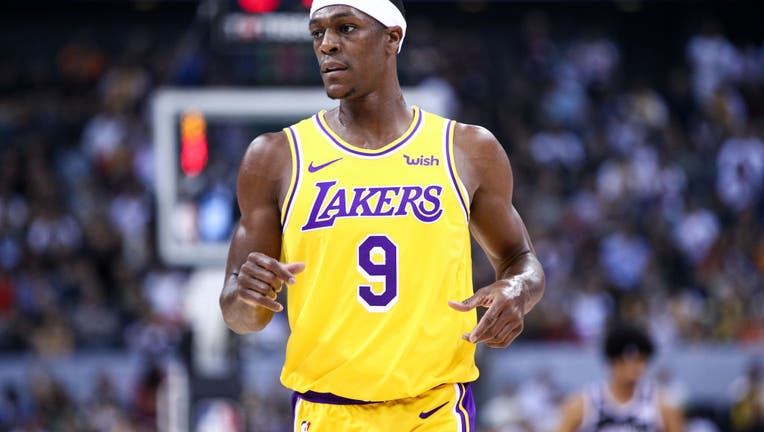 SHENZHEN, CHINA - OCTOBER 12: #9 Rajon Rondo of the Los Angeles Lakers looks on during the match against the Brooklyn Nets during a preseason game as part of 2019 NBA Global Games China at Shenzhen Universiade Center on October 12, 2019 in Shenzhen, (Getty Images)

LOS ANGELES - The Los Angeles Lakers announced Tuesday they have agreed to a deal with 15-year NBA veteran Rajon Rondo.

The details surrounding the deal were not released by the Lakers’ Vice President of Basketball Operations and General Manager Rob Pelinka, but it was reportedly a one-year deal worth $2.6 million.

Rondo’s journey back to Los Angeles is complicated.

Known as "Playoff Rondo," he was a crucial part of the Lakers' 2020 NBA championship team. He then left Los Angeles and inked a two-year, $15 million contract with Atlanta. Later in the 2020-21 season, he was then traded to the LA Clippers for fan-favorite and three-time Sixth Man of the Year Award winner, Lou Williams. Unfortunately, "Playoff Rondo," was essentially a no-show in the postseason as he failed to help the Clips reach the NBA Finals.

The Clippers then traded Rondo, Patrick Beverly, and Daniel Oturu to the Grizzlies for Eric Bledsoe. Rondo then secured a buyout with Memphis.

Plagued by injuries, the Lakers were stunned when their season ended in the first round of the 2021 NBA playoffs. The Lakers front office made many changes to its roster in the offseason to join LeBron James and Anthony Davis. Some players joining the Lake Show for the upcoming season including Russell Westbrook, Dwight Howard, and Carmelo Anthony.

During the 2020-21 NBA season, Rondo averaged 5.4 points, 2.4 rebounds, and 4.4 assists. He is a two-time NBA championship and is the only player in history to win championships with the Lakers and the Celtics.