Man being hailed hero after water rescue in Atlantic City

ATLANTIC CITY, N.J. - A man is being hailed a hero after rescuing a distressed swimmer on the beach in Atlantic City on the Fourth of July.

The current rips through here and that’s what the guys said when I got to him. He said I didn’t expect it, I swim all the time, I didn’t’ expect it, I got caught in it and I couldn’t get out of it,” recalled Justin Freeman.  It’s a much quieter day on the beach along Caspian Avenue in Atlantic City. 34-year-old Justin Freeman says yesterday he was here celebrating the Fourth of July with his family and friends when he noticed a man in trouble. 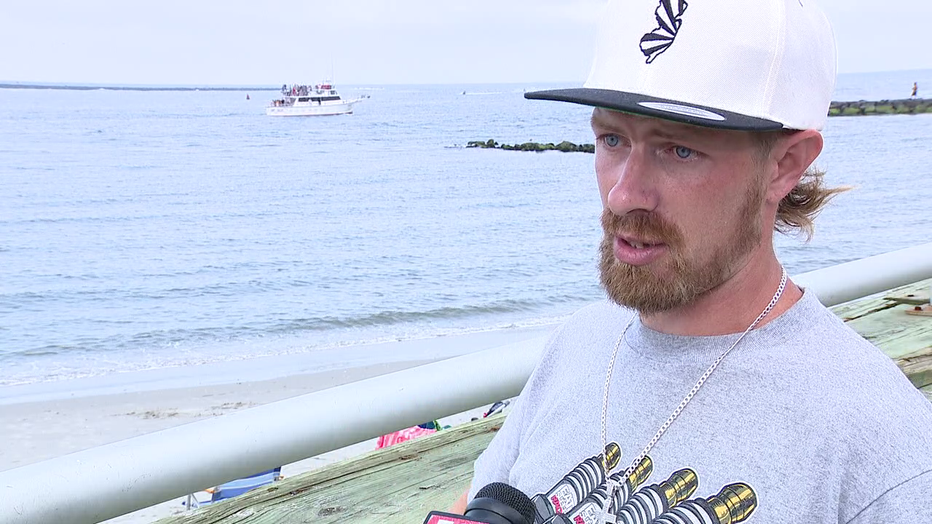 “A guy about 50 to 75 yards out swimming,” said Justin. “I swam out to see if the guy was ok. He said he was good so I turned around to come back,” he said.  But soon after he noticed someone running down the jetty yelling out to the man.  It was the swimmer’s son.

“He’s spitting water out like he was going under. His son was out there with him said I can’t swim what do I do? So somebody down on the beach ran a boogie board down to me. I grabbed that and I dove back in, swam out, got a hold of the guy, grabbed his arm and put the boogie board up under it try to keep him afloat. I got him to relax on his back.” Justin says he then back peddled to get over to the rocks.

His wife had called 911. Fire Rescue and the Coast Guard boat arrived and helped the man the remainder of the way.

“He was probably out there for a good half hour struggling to get in, everybody here watching and people filming it,” said Justin. More than 200 people were packed onto the beach, including Justin's wife and their six children.  He says still he didn't think twice about jumping in to help.

“I had my kids here and in my head, it was what if it was me out there and my kids were watching me? And this kid, this dude’s son is standing there with me and I just went.”

Justin says he was told the man was taken to the hospital to be checked out.