FOX 29's Shawnette Wilson has more on a marine corps. veteran who has gone on hunger strike to call attention to Philadelphia's gun violence problem.

PHILADELPHIA - As part of a protest against the scourge of gun violence plaguing Philadelphia, Marine corps veteran Jamal Johnson has gone on a hunger strike to urge city leaders to take action.

"Mayor Kenney is not addressing the gun violence problem in Philadelphia. We are trying to stop the carnage in the streets. Anybody can be shot or killed in this city," Johnson said while picketing outside city hall on Thursday.

Johnson has been on hunger strike since Jan. 18 after deciding to make a dramatic personal sacrifice to match what he believes is a public emergency. He’s hoping to get Mayor Kenney's attention about a multi-step resolution on gun violence that he claims City Council brought to the mayor five months ago. 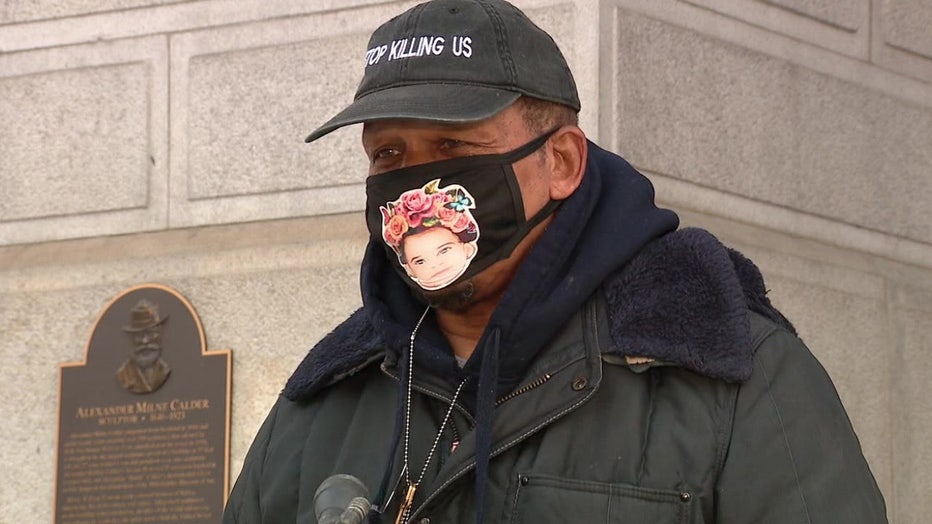 Jamal Johnson started a hunger strike on Jan. 18 to call attention to the city's ongoing rash of gun violence.

"The main one being that gun violence be labeled an emergency in the city of Philadelphia and treated with the same urgency and transparency as Covid-19," Johson said.

He started sleeping outside City Hall but said he was told he couldn't camp out there. So now he protests Monday through Friday and then on the weekend he takes his protest to the mayor's house.

"Seeing the shootings going on randomly I just thought it was time for me to go another step and put my own self on the line and let the mayor see how serious I and others are," Johnson said.

His mask bears the face of Nicolette Rivera, a 2-year-old who was killed when a stray bullet went through her window in Kensington. Johnson says to this day he hasn't gotten a response from the mayor about signing the resolution.

"I do not believe we will ever stop homicides but I do believe we can drastically reduce them if we get involved. We, being the community in alignment with the administration," Johnson said.

"The City supports the First Amendment rights of any person to peacefully protest, however we don’t encourage anyone to take actions that would bring about any harm to themselves or others.
While we are steadfast in our efforts to reducing gun violence in our city, it is vital people understand what they are talking about when calling for a State of Emergency regarding our gun violence epidemic.
That can mean curfews, and might result in what many call "over-policing" - something our Administration is firmly against given our reckoning with decades-old systemic racism.
We are, however, throwing everything we have into reducing violence, including our Community Crisis Intervention Program, Group Violence Intervention strategy, our Targeted Community Investment Grants and our Violence Prevention Partnership to make our communities safer.
By creating and elevating the role of the Office of Policy and Strategic Initiatives for Criminal Justice and Public Safety, we believe we have aligned the violence prevention work in ways that will lead to significant reductions in gun violence this year.
We are also updating the Philadelphia Roadmap to Safer Communities to enhance community engagement in this work.
As we have stated previously, the Mayor put forth a call to action in Fall of 2018, citing that gun violence is a public health emergency, and we have been working unrelentingly to save lives in the midst of a global pandemic.
Instead of arguing over semantics, the City is interested in working together with all stakeholders to address our gun violence epidemic.
In case you haven’t seen it, here are some of the strategies underway by the Office of Violence Prevention: https://www.phila.gov/2020-12-31-confronting-our-citys-rising-gun-violence/