The new trailer for the upcoming Disney+ series debuted during the Emmy Awards.

Marvel gave fans a first look into the next era of its television production during Sunday night’s Emmy Awards.

The studio released a trailer for “WandaVision,” a six-episode series based on Wanda Maximoff and Vision from the Avengers franchise.

Marvel has previously produced plenty of shows with tie-ins to its shared cinematic universe. But prior to last year’s launch of the Disney Plus platform, studio executive Kevin Feige announced several new big-budget shows that would have much stronger ties to the films. 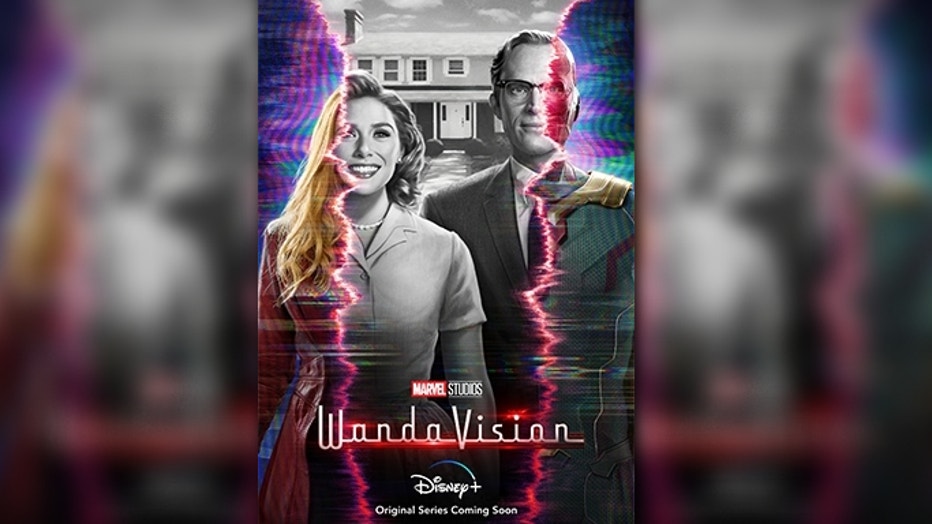 The trailer starts in black and white with a set and costumes reminiscent of 1950’s-style sitcoms. (Walt Disney Pictures)

The trailer starts in black and white with a set and costumes reminiscent of 1950’s-style sitcoms.

Despite opening in a happy tone, something appears off just six seconds into the trailer.

Vision is alive, and he’s dancing with Maximoff in her wedding dress. The last time we saw the Vision character, he was dying the end of 2018’s “Avengers: Infinity War.”

Nearly 30 seconds into the trailer, Vision and Maximoff appear to realize they have a gap in their memories.

Suddenly, their world becomes more colorful and we see flashes of the two dancing through the decades, their fashion evolving with the times. According to Marvel, the two will sport their iconic comic book costumes at one point.

Elizabeth Olson will reprise her role as Maximoff, also known as the Scarlet Witch.Paul Bettany returns as Vision.

We previously met Monica Rambeau when she was still a child in 2019’s “Captain Marvel.” The character will be picked up in her adult form by Teyonah Parris.

Other familiar characters include Darcy Lewis and Jimmy Woo.Lewis, who appeared in the Thor franchise, will be played by Kat Dennings. Woo, who first appeared in 2018’s “Antman and the Wasp,” will be played again by Randall Park.

The studio has not confirmed a release date, but “WandaVision” will air exclusively on Disney Plus.