The 7-alarm blaze displaced many families in the area.

BOUND BROOK, N.J. - A large fire that started in an apartment building under construction spread to several other buildings late Sunday in a downtown New Jersey district, but no injuries were reported.

The fire in Bound Brook broke out around 8 p.m. Sunday at the construction site and spread to another apartment building across the street, two houses and an electronics store, Police Chief Vito Bet said. Strong, gusty winds helped spread the blaze, which was brought under control several hours later.

Dozens of residents were forced to evacuate as the fire spread, and power outages were affecting parts of the town, authorities said.

The cause of the fire wasn’t immediately known.

NJ Transit initially suspended the Raritan Valley Line in both directions, substituting bus service; service resumed after 3 a.m. Monday. However, the Bound Brook Rail Station was closed Monday due to the fire and related investigation.

Bound Brook is in Somerset County and around 30 miles west of New York’s Staten Island. 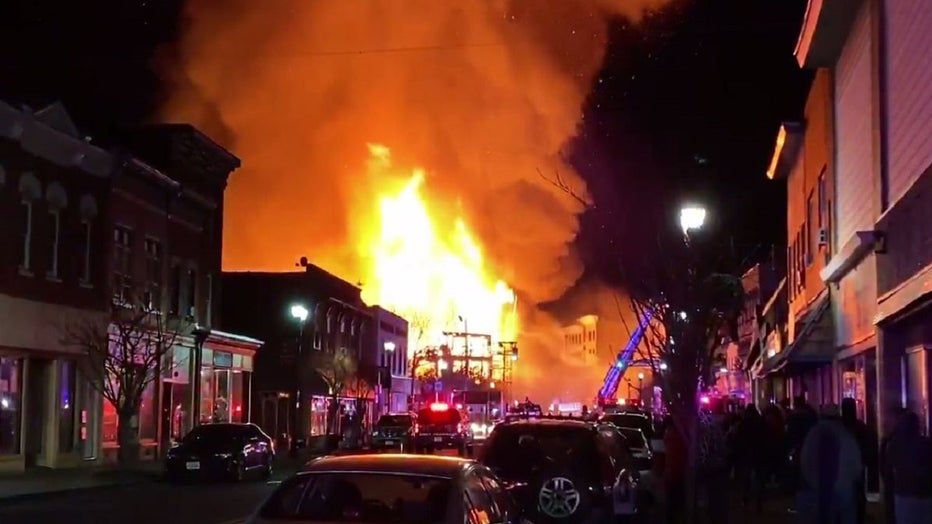 “Bound Brook was in the process of a renaissance,” Councilman Abel Gomez said. “Now we have this fire.”

The fire started in an unoccupied complex called the Meridia Downtown, which Bound Brook Borough Councilman Abel Gomez said included 174 apartments and retail space. Gomez said the apartment complex across the street — also under construction — had space for 60 residential units and a restaurant.

The councilman said the destroyed complexes were developed with private funding and within the downtown redevelopment zone. The area had suffered a series of floods over the past two decades, and the apartments were supposed to be part of a downtown renaissance following the 2016 completion of a flood control project.

“Bound Brook was in the process of a renaissance,” Gomez said. “After all the floods we’ve had here, and now we have this fire.”