FOX NEWS - U.S. Rep. Matt Gaetz fired back Friday after Democratic New Jersey Gov. Phil Murphy told the Florida Republican he was no longer welcome in the Garden State after being photographed without a mask at a Jersey City restaurant.

"You’re gonna regret this tweet when you move to Florida like the rest of New Jersey," Gaetz wrote in response to Murphy, who mockingly referred to Gaetz as "Matt Putz" and included a past photo of Gaetz wearing a gas mask.

At a news conference earlier in the day -- and then again on Twitter -- Murphy blasted the GOP congressman for attending a crowded party for the Young Republicans because the event allegedly broke the state’s COVID-19 rules as cases spiked across the country.

"That guy in the middle, the tall, handsome fella in the gray suit, that is Representative Matt Putz - oh sorry, Matt Gaetz, and based upon his past performances, it is obvious being a knucklehead is not beyond the pale for him," Murphy said during the news conference. "He was actually Sarah Palin's backup act for this event." 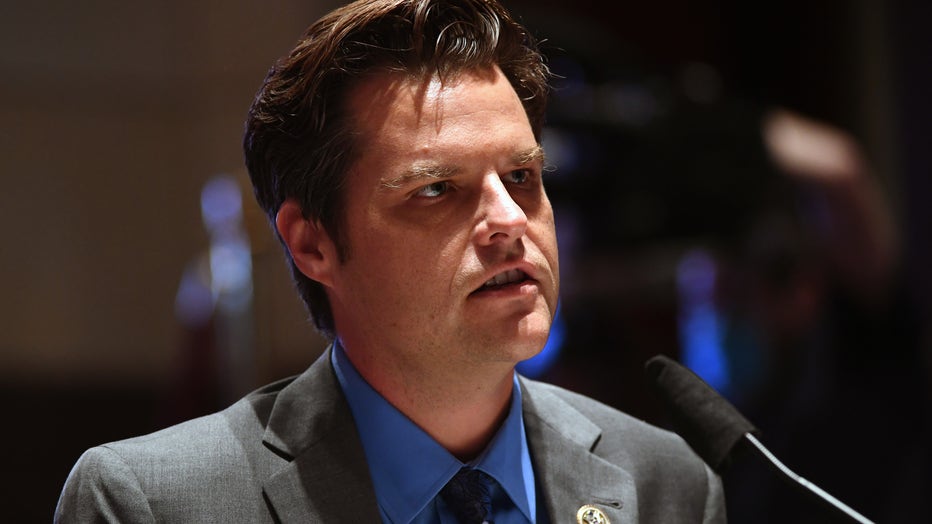 "I hope you're watching, Matt. You are not welcome in New Jersey, and frankly I don't ever want you back in this state," he added.

Murphy then reiterated his criticisms in a tweet and said, “Last night, the [New York City Young Republicans] allegedly snuck into Jersey City to hold a “gala fundraiser” – ignoring our social distancing and mask rules.”

“It is beyond the pale that anyone would willingly endanger people in another state,” he added. “Jersey City law enforcement is investigating this matter.”

“It is also beyond the pale that Rep Matt Putz – I mean [Rep. Matt Gaetz] – would participate in this. What a fool,” Murphy said.

“Matt – You are not welcome in New Jersey, and frankly I don’t ever want you back in this state," he repeated.

The tweet included a photo of Gaetz at the party, surrounded by groups of people, none of whom were wearing masks or social distancing.

New Jersey coronavirus regulations have dictated weddings, religious ceremonies and indoor political gatherings are required to not exceed 150 people or 25 percent capacity of the venue, whichever is lower, according to the state’s COVID information website.

Whether the gathering constitutes a political event, or whether it violated the capacity limits, remained unclear but Murphy said the event was being investigated by state officials.

RELATED: Murphy warns that pandemic is 'nowhere near over' in NJ

“In Jersey City we take Covid enforcement very seriously, and this event appears to be an egregious violation of the governor’s executive orders, including capacity limitations and mandatory mask wearing," Jersey City Mayor Steven Fulop said in a statement to WNBC.

Though the location of the event was not posted on social media, Gaetz and other fellow Republicans mocked Democrats and their COVID regulations. One Trump supporter told New York Gov. Andrew Cuomo to “Come and get me,” while posing in a photo with Gaetz. (Jersey City is directly across the Hudson River from New York City.)

New Jersey’s chief prosecutor joined the social media jabbing, and reminded the Republicans that not only New York City has coronavirus restrictions.

In another tweet, Gaetz jokingly thanked Murphy for calling him a "handsome fella."

"I'm only considered handsome in New Jersey, though," he wrote.

Gaetz later asked Murphy if the GOP should organize a politcal protest in order to be allowed to congregate, nodding at the Black Lives Matter protests this summer.

"Should we organize a “peaceful protest” of lockdowns in New Jersey?" he tweeted Friday night.

New Jersey has reported more than 356,000 cases and more than 15,000 deaths since the pandemic started.

In recent weeks the state has seen spikes surpassing its spring-time peak daily caseload -- with Friday figures surpassing the state's previous daily high in April by more than 1,300 confirmed cases.