Joe Biden leads the polls in Michigan, but experts are skeptical

Four years ago, President Donald Trump did the unthinkable: He cracked the foundation of Michigan’s “blue wall.”

DETROIT - Four years ago, President Donald Trump did the unthinkable: He cracked the foundation of Michigan’s “blue wall.”

Trump accomplished this in a state that had voted Democratic in six consecutive presidential elections from 1992 through 2012. Now, predicting where the pendulum will swing in 2020 is “the $64,000 question,” says David Dulio, a political science professor at Oakland University in Rochester Hills, Michigan.

When asked in August who would likely win if the election was held today, Dulio said, “We’ve seen polling that has former Vice President Biden in the lead here in Michigan, but we’ve had some prominent Democrats come out and express a little skepticism in those polls, including Congresswoman Debbie Dingell and our Governor Gretchen Whitmer, have both said that they don’t buy that and that they think it’s really tight here.”

Michigan officially joined the Union in 1837 and went on to favor Republican candidates in presidential elections up until the Great Depression.

While Michigan’s Democratic presence has been prominent in recent years, the state’s voting history could be more accurately compared with that of a pendulum swinging between two parties.

The state voted exclusively Republican from 1972 through 1988 before the emergence of the “blue wall” that had its foundation rocked when Trump defeated Hillary Clinton in 2016 by a razor-thin margin of 0.2%. 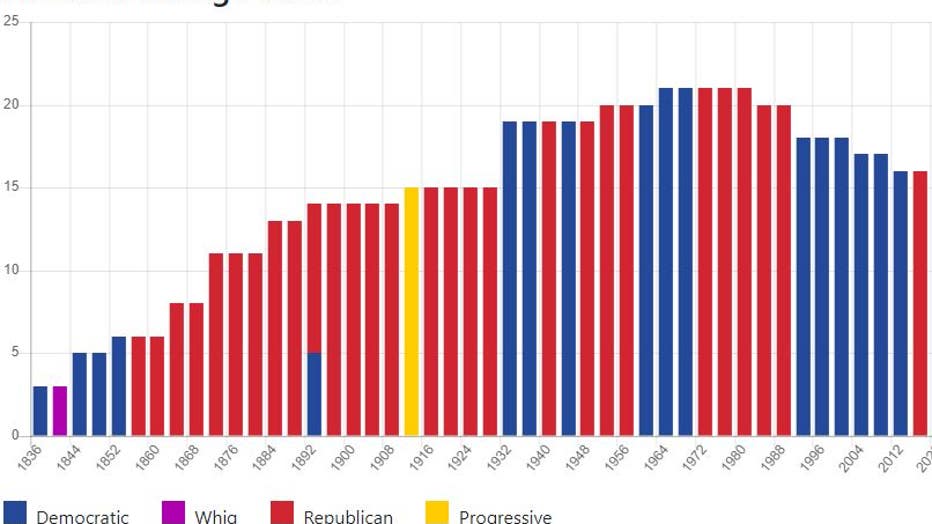 Polls favor Biden, but Democratic leaders in Michigan are skeptical

Polling in Michigan ahead of the 2020 election has consistently predicted Biden beating Trump in the Great Lakes State.

But polling aside, many Democratic leaders aren’t necessarily buying the numbers out of concern about history repeating itself, experts say.

During the 2016 election, Democrats got sidelined, watching Trump take the state despite every poll indicating the solidity of Michigan’s “blue wall.”

In 2016, Clinton led the polls by three or four points, similar to what Biden is averaging leading up to the 2020 election, and still Trump declared victory then.

Despite the fear among Democrats of a repeat of history, Steve Mitchell, president of Mitchell Research & Communications, a national polling and consulting company, said that “Biden is in stronger shape in Michigan than he was say a week ago,” when asked on Sept. 11 who would win the election if it was held today.

Mitchell blames Trump’s thin marginal victory over Clinton in 2016 on other party candidates like Libertarian candidate Gary Johnson and Green Party candidate Jill Stein. He contends that Clinton would have taken the state four years ago if the contest was held between just the two candidates.

But Mitchell added that polls in 2016 were off by a 4% margin, a margin of error that is also apparent today. It’s important to remember that this race is an ever-changing one, Mitchell said. Between a global pandemic, social justice protests and many other issues as election day closes in, the race could move in any direction in a short period of time.

To add to the confusion, Michigan is navigating uncharted waters as more absentee ballots were cast before the state’s Aug. 4 primary than in any other election in state history.

Secretary of State Jocelyn Benson has pushed Michiganders to vote absentee, even going so far as to send every registered voter a mail-in ballot application using $4.5 million of federal funds. The decision has drawn criticism from Republican legislators and President Donald Trump, but residents have widely taken advantage of the voting method.

The push for absentee or mail-in ballots comes amid the ongoing COVID-19 pandemic that election officials are worried might impact voter turnout.

Democratic voters’ reluctance to physically show up to the polls on Election Day could greatly impact the state’s results on Nov. 3, according to Dulio, since Trump’s base seems more likely to vote in person.

Dulio noted that what contributed to Trump’s victory in Michigan was voter turnout.

“It was down in Democratic strongholds and up in Republican strongholds,” Dulio said. “Hilary Clinton got 80,000 fewer votes out of Wayne County, which is the home of Detroit — 80,000 fewer votes in that one county than Barack Obama did. Meanwhile, in areas in Michigan that we would call ‘up North,’ the northern portion of the lower peninsula and the upper peninsula in Michigan had great turnout and increased Republican performance that saw Donald Trump get a much larger share of the vote with increased turnout.”

Mitchell thinks that Michigan almost certainly will see more Republicans voting on Election Day than will be voting by mail.

“But I think you’re going to see a huge number of voters voting by mail all over the country, certainly here in Michigan as well, since all of the voters in Michigan did receive an application for an absentee ballot,” he said.

‘A tale of two electorates’

Knowing the state’s voting history, Dulio said the typically blue voting record for the past several decades has been more of an “appearance” than a hard-and-fast rule.

“Underlying those Democratic victories at the presidential level was some real competitiveness here in Michigan where Republicans had seen some victories statewide for governor and for other offices,” Dulio said. “So Michigan really is a competitive state and really goes to the candidate that voters here feel best suits them,” he added. “It really is this, not Jekyll and Hyde, but this kind of a tale of two electorates.” 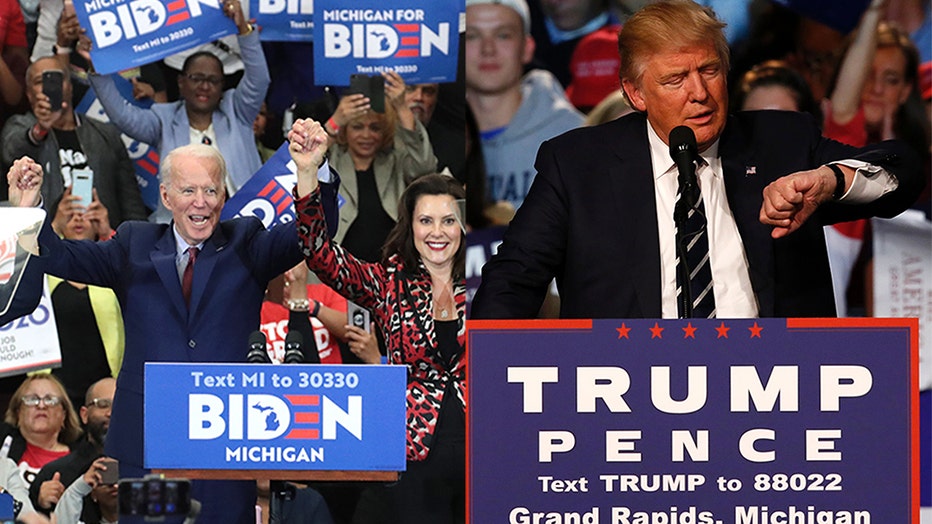 Dulio explained that Michigan has seen Democrats do well in federal races such as the U.S. Senate, while Republicans have seen success at the state level in offices such as attorney general or secretary of state.

All of this appeared to change during a “blue wave” that occurred in the 2018 election, which saw the election of a Democratic governor and secretary of state.

Which message resonates with Michiganders more?

Despite winning by such a thin margin, Dulio explained that Trump’s populist “America first” message is what got key votes in a state heavy with industrial and manufacturing jobs.

But this year, voters in Michigan’s Democratic primary ranked health care as the most important issue facing the country, well above climate change, the economy, race relations, foreign policy and other social issues.

About 4 in 10 Democratic primary voters named health care of great importance. Roughly 2 in 10 had climate change and the economy on their minds, according to a wide-ranging AP VoteCast survey of the Democratic primary electorate in Michigan taken in March.

Voters in Michigan’s Democratic primary were closely divided over whether they wanted a candidate who would bring fundamental change to Washington or one who would restore the political system to how it was before Donald Trump was elected in 2016.

Trump may have fired up voters looking to bring back jobs from China four years ago, but the Associate Press poll during the state’s March primary found that only 2 in 10 of the state’s residents called the economy the top issue. A significant majority described the economic system in the country as unfair — including about a third who said it’s very unfair.

Citing some of the polls his company has done in Michigan, Mitchell said, “If you ask voters what’s more important, coronavirus or jobs and the economy, about 75% of the Democrats are telling you that the most important issue is the coronavirus, about 75% of Republicans are saying the economy and jobs. So there’s a real dichotomy in terms of perception on what’s the most important issue,” Mitchell said.

He recalled what he said was a similar phenomenon in 2004, when George W. Bush was running against Democratic Sen. John Kerry of Massachusetts.

Mitchell added that Trump’s message to Michigan voters is that if he is reelected, he will do more for the auto industry and more for jobs.

Biden, on the other hand, is banking on the fact that there won’t be many jobs to go around if the pandemic is not brought under control. He’s set his sights on convincing voters in the Great Lake State that Trump is responsible for the crisis Americans find themselves in, according to Mitchell.

“This appeals to his base,” Mitchell said. “Gov. Whitmer has been one of the more conservative governors in terms of keeping the state under lockdown for a longer period of time than other states have.”

Mitchell said that in dueling messages, Democrats are pushing for public safety and blaming Trump for thousands of deaths caused by the coronavirus, while Republicans base their pitch on job security and continuing the facilitate the pre-pandemic economic growth.

It all depends on which message Michigan voters actually buy, according to Mitchell.