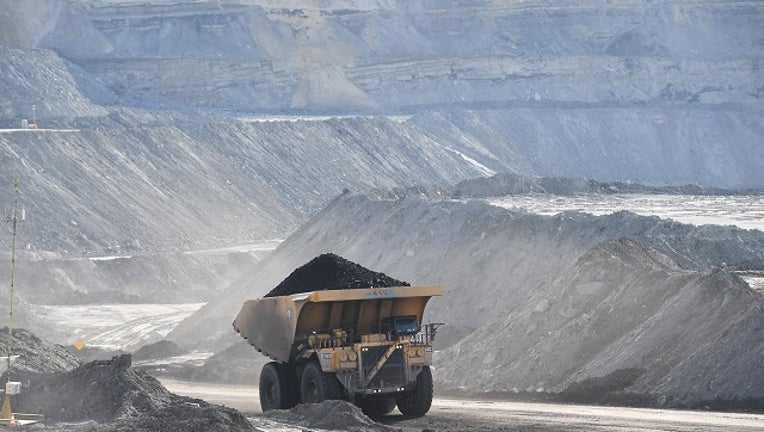 A truck loaded with coal is viewed from the Eagle Butte Coal Mine Overlook in Gillette, WY. ( (Photo by Matt McClain/The Washington Post via Getty Images) )

GILLETTE, Wyo. (AP) - At two of the world's biggest coal mines, the finances got so bad that their owner couldn't even get toilet paper on credit.

Warehouse technician Melissa Worden divvied up what remained of the last case, giving four rolls to each mine and two to the mine supply facility where she worked.

Mine owner Blackjewel LLC filed for Chapter 11 bankruptcy protection on July 1. Worden at first figured the accounts would get settled quickly and vendors of everything from copy paper to parts for house-sized dump trucks would soon be back to doing normal business with the mines.

"The consensus was: In 30 days, we'll look back on this, and we made it through, and we'll be up and running, and it's a fresh start," Worden said.

What happened instead has shaken the top coal-producing region in the United States like a charge of mining explosive. Blackjewel furloughed most of its Wyoming employees and shut down Eagle Butte and Belle Ayr mines, the first idled by hardship since coal mining in the Powder River Basin exploded in the 1970s.

It's a big hit to the region straddling northeastern Wyoming and southeastern Montana, where coal has quietly supported the economies of both states for decades and fuels a shrinking number of power plants in 28 states.

And doubts are growing about the long-term viability of the region's coal mines -- particularly Eagle Butte and Belle Ayr, the fourth- and sixth-biggest in the U.S. by production, respectively.

Blackjewel, based in Milton, West Virginia, told its Wyoming employees this week that the mines might be up and running soon and to let the company know if they wanted their jobs back.

Worden said she felt little reassurance. On a break at a part-time electrical contracting job in North Dakota, she wondered if she should accept any offer of full-time work or hold out for her old job.

She's not the only one questioning long-held assumptions about Powder River Basin coal mines, which produce cleaner-burning coal less expensively than mines in other parts of the U.S. and weren't widely thought of being at risk despite a push for renewable energy to combat climate change.

But with coal in long-term decline, how the basin might eventually scale down production to a sustainable level has become a big question, said Rob Godby, director of the Center for Energy Economics and Public Policy at the University of Wyoming.

"The irony here -- and it's really a cruel irony -- is everybody is focused on getting these miners back to work. But really the solution to creating a healthy industry is some mines close," Godby said.

For now, little appears changed in Gillette, a city of 30,000 people at the heart of the basin of rolling grasslands midway between the Black Hills and snowcapped Bighorn Mountains. Tattoo shops are abundant, and big, late-model pickup trucks still cruise the main drag.

This year, however, has been especially tumultuous. Three of the Powder River Basin's nine producers -- Westmoreland Coal, Cloud Peak Energy and Blackjewel -- have filed for bankruptcy since March. Two others, Arch Coal and Peabody, have announced they will merge assets in the region.

The turmoil comes as U.S. coal production is down over 30% since peaking in 2008. Utilities are retiring aging coal-fired power plants and switching to solar, wind and cheaper and cleaner-burning natural gas to generate electricity despite President Donald Trump's efforts to prop up the coal industry.

A decade ago, about half of U.S. electricity came from coal-fired power. Now it's below 30%, a shift that heavy equipment operator Rory Wallet saw as utilities became less willing to lock in multiyear contracts for Belle Ayr mine's coal.

"The market's changed," Wallet said. "The bankruptcies all tie into that."

Wallet, 40, followed his father, an equipment mechanic, into the Belle Ayr mine in 2008. He said the recent mine closures and loss of his $80,000-a-year job took him by surprise.

He has four children, ages 11 to 16, and his wife's job at the Ruby Tuesday's restaurant in Gillette is their main income while they await news about the mines.

Blackjewel said Thursday that it was working on plans to restart the mines while pursuing their sale. There were no indications in federal bankruptcy court filings in West Virginia that the mines were set to reopen, however.

"This is a fast-moving and sometimes unpredictable process, and accordingly, we do not have answers to all of your questions at this time," the company's statement said.

Wallet is looking for a job and using his downtime to sell "We Will Rise Again" T-shirts to benefit families of out-of-work coal miners. He's also lobbying Wyoming lawmakers to fight harder to force Washington state to approve a port facility expansion that would allow more coal exports to Asia.

He questions the outlook from Godby of the Center for Energy Economics and Public Policy that some mines must close.

Wallet pointed out that the Powder River Basin still has a century or two of recoverable coal left. And just north of Gillette, the state has invested $15 million in a facility to study how to capture climate-changing carbon dioxide from a working power plant and profitably use it in products ranging from concrete to biofuels.

Wallet is optimistic that technology could save coal. But carbon capture, if it happens at all, could arrive too late to do the coal industry much good amid global concern about climate change, Godby said.

"We will not see widespread adoption of carbon capture and storage for at least a decade," Godby said. "That's just the reality."

He also doubted that exports can save the region's coal industry. There's no direct rail line to the Pacific Northwest from most of the basin's mines, and the amount of coal that the proposed export terminal could handle would offset only a small fraction of the amount that production has declined, Godby said.

Powder River Basin mines employ about 5,000 miners -- 20% fewer than eight years ago. But the impact is even wider because an additional 8,000 jobs, from teachers to car mechanics, have indirect ties to the broader economy around the coal industry.

Local unemployment rose to 5.7% in July, compared with 4.1% a year earlier.

Trump got 88% of the vote in Campbell County, the heart of the basin. Locals cheered when he lifted a federal moratorium on coal leases that former President Barack Obama imposed, but Worden and Wallet disagree about whether changing environmental regulations will do much good in the long run. Wallet thinks improvement could be just around the corner.

Both say coal should continue to have a place in the economy alongside renewable energy.

"It needs to be a group effort, not green is on one side and black is on the other," Worden said. "We don't want this community to die."