SEATTLE - A sign at a popular Seattle ice cream shop is sending a loud message to local police officers.

Molly Moon’s Homemade Ice Cream on Capitol Hill put up the sign telling officers, if you’re armed, you’re not welcome inside their business.

The sign reads, "Police Officers: Molly Moon's is a gun-free zone. Please do not come inside if you are wearing a firearm. No guns allowed inside." 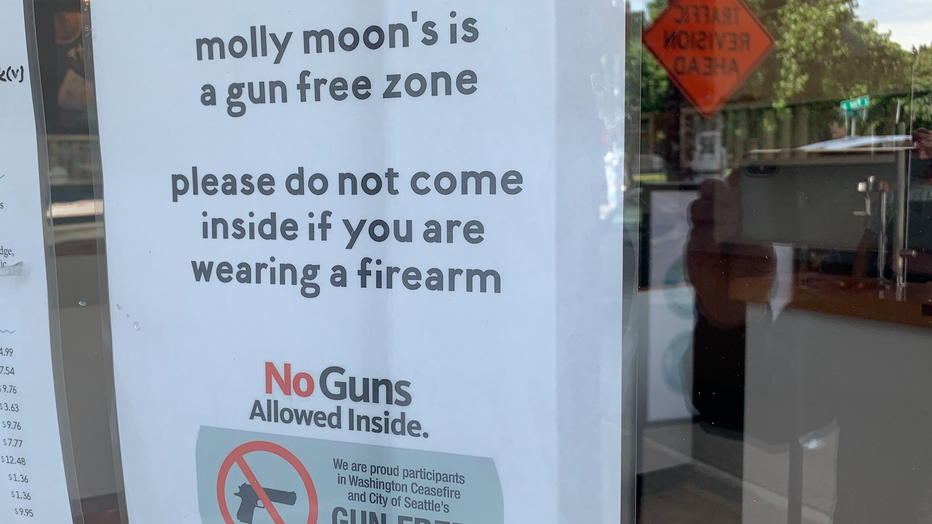 Molly Moon Neitzel, owner and founder of the local ice cream chain, said the sign was her idea, and since she posted it, she's been getting threats social media.

"I am anti the current police system," she said. "Yeah, I think we need major reform."

Moon Neitzel said she's had signs in her shops for the last five years saying they are "gun-free zones," but she just put up the new sign directed at police.

She said some of her employees felt intimidated by officers after they cleared out the nearby Capitol Hill Organized Protest or CHOP zone last week. A patron also paid $500 so officers could come in and get ice cream for free.

"We had a few hundred come in packing their guns and it was making my employees feel uncomfortable," Moon Neitzel said.

Customer Carl Smith heard about the sign. He showed up to give her a hug and drop $500 of his own.

"Anyone who comes to Molly Moon's today, ice cream is on me." Smith said. "I just reallty support what she's doing"

“You know we’re human beings," said Mike Solan, president of the Seattle Police Officers Guild. "I don’t think the reasonable community in the city of Seattle is saying we allow police but they can’t be armed.”

Solan called the the sign is "political pandering" that could backfire.

“Have a conversation," Solan said. "And maybe we can enjoy ice cream at your great business, but we’re going to do it while armed.”

For now, Moon Neitzel has only posted the sign at the Capitol Hill shop, not her eight other locations. She said police officers are not banned.

"If they want to come into my shop and buy ice cream without a gun, they are welcome," she said.

Moon Neitzel said it’s up to individual employees to decide if they want to ask armed police officers to leave.

She said business is down more than 50% compared to last year due to the pandemic. She recognizes, the sign may alienate some customers.

Moon Neitzel said, "I am going to continue to be a business person and and activist that continues to see truth as I see it."