ABILENE, Texas - A mother of three said she spent nearly a month in the hospital and was put into a medically-induced coma after falling critically ill — and doctors suspect her daily vaping habit was to blame.

Sherie Canada of Abilene, Texas, said she vaped for about three years and believes the habit “nearly killed” her.

“I wasn’t even a smoker before,” she wrote in a Sept. 6 Facebook post. “I tried it and liked the flavors it had to offer and then got addicted to the nicotine in it.”

Earlier this summer, Canada said she became ill, started losing an unusual amount of weight, and had a bad cough, chest pains and difficulty breathing, she wrote on Facebook. After her condition worsened, she eventually went to the emergency room on June 12 and was found to have low blood pressure, low oxygen levels as well as fluid and blood clots on her lungs. 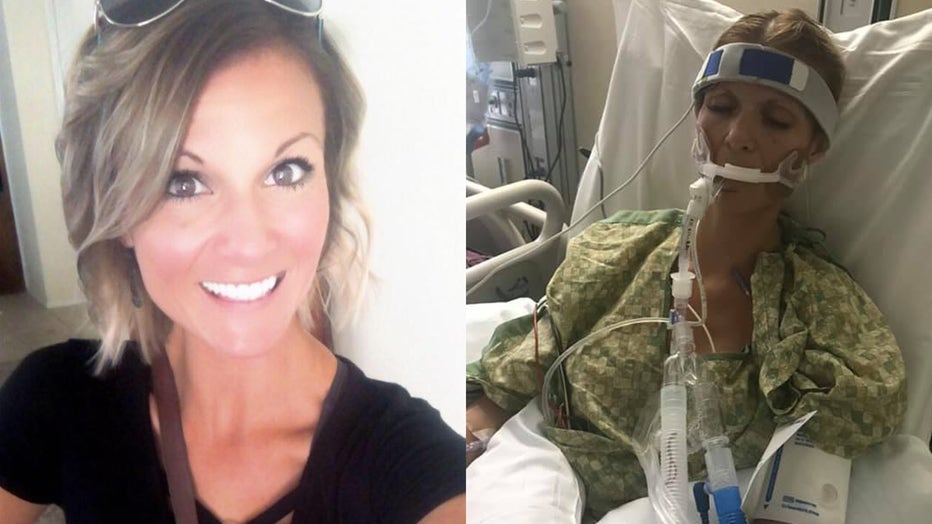 Sherie Canada is pictured in an undated photo, alongside an image of her in a hospital bed. In total, Canada spent more than three weeks hospitalized. (Photo credit: Sherie Canada / Provided)

“I was so scared but more (than) anything in so much pain,” she wrote of that time in part.

Six days after she was admitted to the hospital, Canada said she was placed into a medically induced coma on June 18 — the same day as her oldest son’s 15th birthday.

“I was in and out from the pain meds but I knew the day had come that I needed to go to sleep and rest,” Canada wrote. “I was absolutely terrified that I was never going to wake back up and see my boys, family, or friends again.”

Doctors removed approximately 4 liters of fluid off of Canada’s lungs. She woke up two days later and was eventually released from the hospital on July 5 with “a whole new perspective (on) life,” she wrote.

She was officially diagnosed with ARDS, or acute respiratory distress syndrome, a rapidly progressive disease in which fluid leaks into the lungs making it difficult or impossible to breathe, according to the American Lung Association.

Many people who develop ARDS don't survive and the risk increases with age and severity of the illness, according to the Mayo Clinic. Of those who do survive, some can recover completely while others have lasting damage to their lungs.

“When I woke up and one of the doctors told me how bad the vaping was and the fluid and infection it puts on my lungs, I knew the biggest problem behind my sickness and what nearly killed me,” Canada wrote on Facebook.

Canada said she decided to share what happened to her on social media in hopes of letting others know “the risk of inhaling things into your lungs.”

“You have no idea of how precious (lungs) are until they aren’t yours anymore and a machine is telling them to breath for you,” she wrote. “I had so much shame, guilt and my anxiety was beyond extreme!”

Canada said she is doing well now and hopes her story can reach younger people “more than anything,” noting that vape juices are “so highly addictive.”

RELATED: ‘I didn't think it would happen to me': Doctors believe vaping caused teen's double-lung collapse

“You don’t know what is in those juices,” Canada said. “I believe all these shops should be tested like Utah did, for some sellers may not even know what they are selling!”

A Utah state representative has been pushing to ban e-cigarette products in the state, claiming a sample study found illegal drugs in 84 percent of the e-liquid products tested.

Canada’s story comes as U.S. health officials investigate the cause of hundreds of serious breathing illnesses in people who use e-cigarettes and other vaping decides nationwide — including six deaths.

“It is time to stop vaping,” said Dr. Lee Norman of the Kansas Department of Health and Environment Secretary. “If you or a loved one is vaping, please stop.”