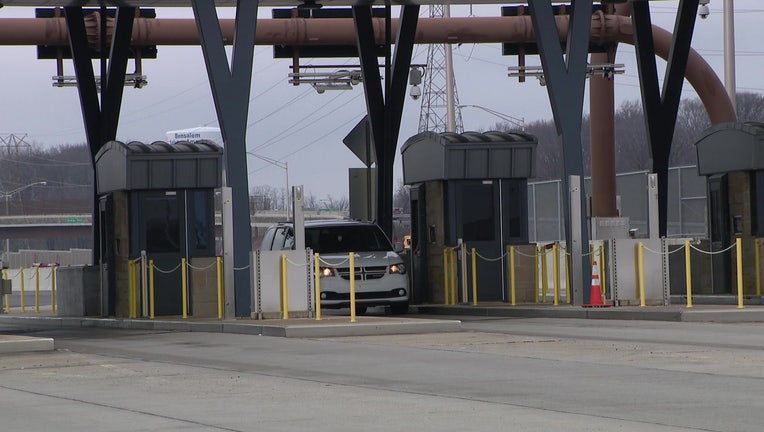 CARLISLE, Pa. - More than $104 million in Pennsylvania Turnpike tolls went uncollected last year as the agency fully converted to all-electronic tolling, with the millions of motorists who don't use E-ZPass having a nearly 1 in 2 chance of riding without paying under the "toll-by-plate" license plate camera system.

An internal turnpike report issued in July and obtained by The Associated Press through a Right-to-Know Law request showed nearly 11 million out of the total of about 170 million turnpike rides generated no revenue for the agency in the year that ended May 31.

"We take this issue very seriously. It is a big number, there's no question," turnpike Chief Executive Mark Compton said. "But we, as an organization, are leaving no stone unturned in the way in which we’re going after that leakage."

Toll revenue "leakage" — an industry euphemism for uncollected tolls — has become the focus of turnpike agencies across the country as the use of E-ZPass transponders and license plate cameras continues to spread.

It is a particular problem for the debt-strapped Pennsylvania Turnpike, where more than half of its total revenue goes to pay borrowing costs and tolls have more than quadrupled in 12 years for the minority of motorists who don’t have E-Z Pass to pay for rides.

At the gas pumps of a busy truck stop along the turnpike in Carlisle last week, driver Corin Bryant said he's noticed tolls have become much more expensive in recent years and doesn't much like the idea of free riders.

"We should all pay for it or all not," said Bryant, of Picayune, Mississippi. "One or the other."

The turnpike, touted as the nation’s first superhighway when a mostly four-lane segment opened in 1940, is a key part of the interstate highway system. The turnpike runs more than 500 miles, including several sections that connect with a main stem linking the Philadelphia and Pittsburgh regions.

Last year, license plates could not be identified in 1.8 million Pennsylvania Turnpike rides, bills were undeliverable in just over 1 million instances, and motor vehicle agencies failed to provide vehicle owner addresses more than 1.5 million times. An additional 6.7 million transactions were marked as "not paid."

"I’m kind of shocked at that," said Rebecca Oyler with the Pennsylvania Motor Truck Association, representing truckers, who mostly use E-ZPass. "If you think about it, they control the driver. Theoretically they could stop the driver from exiting before paying; that’s within their ability to do."

After tolls and fees go uncollected for about three years, the turnpike writes them off.

State House Appropriations Chairman Stan Saylor, a York County Republican, said the revenue bleed has been a concern of his for years and thinks the new figures show a need for action. He said the Legislature should do more to pressure the agency to fix it and that the money could fund a lot of work.

"That kind of loss is amazing," Saylor said. "I’m sorry, when you have a debt, and the tolls are as high as they are on the Pennsylvania Turnpike, then you need to be more efficient."

It can result from faulty equipment, such as a dead battery in an E-ZPass transponder; from failure of the camera systems to capture a plate number properly; or from an inability to pursue out-of-state drivers, he said.

The turnpike's sprawling 552-mile system had 169 million transactions last year, with the lion's share, about 145 million, going through E-ZPass. The E-ZPass system helped the turnpike collect tolls on about 93% of all trips.

After a pandemic-driven decision to lay off hundreds of toll collectors and auditors last year and end cash collections, the turnpike issued a 45% rate increase this year for drivers who do not have E-ZPass and instead must be billed.

In place of the toll collectors are license plate cameras and employees of contractors who have to examine photos of vehicles when the system has not automatically generated an owner’s name and address for a paper bill to be mailed out.

The turnpike's July report said that in nearly half the instances in which license plate camera images were not usable, the reason was the plate was not in the frame of the photo. Examples provided in the report included lack of front license plates, which are not issued in Pennsylvania.

About 41% of the image failures were blamed on an obstruction such as a bike rack. In about 1.1% of manually voided images, the problem was attributed to intentional obstruction of the license plate.

Toll evaders around the country have been creative, using grease to obscure plate numbers and installing devices that deploy to cover up plates when drivers go past plate cameras. Weather conditions and camera malfunctions can also make plates impossible to read.

The turnpike also asks county district attorneys to pursue theft-of-services charges for those who owe at least $2,000, and since 2002 has been referring overdue payments to debt collectors for drivers in Pennsylvania and beyond.

Out-of-state drivers are a particular problem. The turnpike gets vehicle registration addresses from 49 other states — only Iowa does not provide it — but so far does not have agreements in place letting them currently suspend out-of-state registrations for unpaid toll bills.

The Pennsylvania Turnpike is finalizing such an agreement with Delaware and is in talks with New York.

State Transportation Secretary Yassmin Gramian, who chairs the turnpike board, said the state’s overall toll collection rates are consistent with those in other states and slightly better than the national average.

Gramian said the turnpike commission wants more power to go after out-of-state toll scofflaws, but that requires legislation in those states. The variation among states about the penalties and fees they assess on turnpike drivers is another issue, Compton said.

"Uniformity at the federal level would certainly be helpful in this area, and reciprocity between states is an ongoing conversation among tolling agencies nationwide," Gramian said.

The Pennsylvania Turnpike approved a $45 million contract in 2014 to develop and implement all-electronic tolling, and it currently pays vendor TransCore about $10 million annually to operate the toll-by-plate system.

It is also spending $129 million to relocate tolling points to gantries on the interstate rather than the brick-and-mortar facilities currently at interchanges, a project currently being designed and engineered.