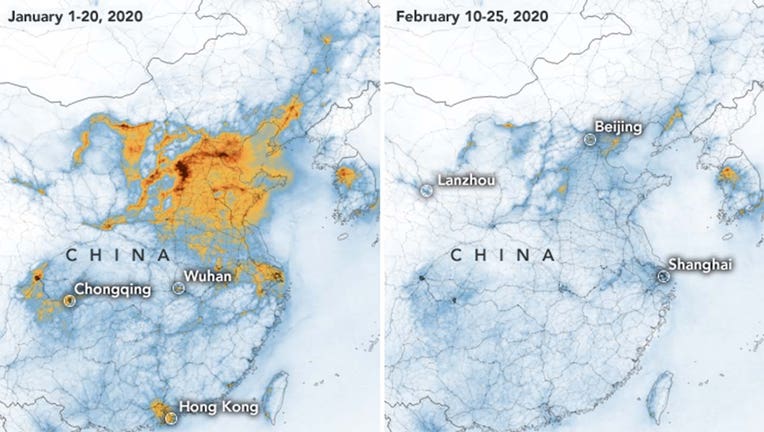 There have been “significant decreases in nitrogen dioxide over China,” reports NASA as quarantines remain in place within the country.

The pictures captured the level of toxins in the air above China before and after the surge of coronavirus. Before January’s outbreak, heavy amounts of nitrogen oxide – represented in yellow – are seen being generated. That time shows the concentrations of nitrogen dioxide levels over Beijing and near Wuhan from Jan. 1 through 20 – before mandated quarantines began.

One month later, the satellite image from Feb. 10 to 25 show virtually no toxic gas above the same area. Nitrogen dioxide is generally produced by cars and manufacturing plants.  Environmentalists suggest the large decrease in the toxic gas stem from the quarantines. With few people traveling or working, vehicles and factories can’t produce the same high level of emission.

According to FOX News, some businesses remain closed amid the outbreak.

“There is evidence that the change is at least partly related to the economic slowdown following the outbreak of coronavirus,” according to a tweet by NASA.
In January, Chinese authorities locked down several cities and suspended all transportation entering and exiting Wuhan.

Barry Lefer, a NASA scientist, said pollution levels usually decrease around the Lunar New Year holiday because many businesses and factories are closed. Levels usually increase after the celebration.

“This year, the reduction rate is more significant than in past years and it has lasted longer,” Liu said. “I am not surprised because many cities nationwide have taken measures to minimize [the] spread of the virus.”