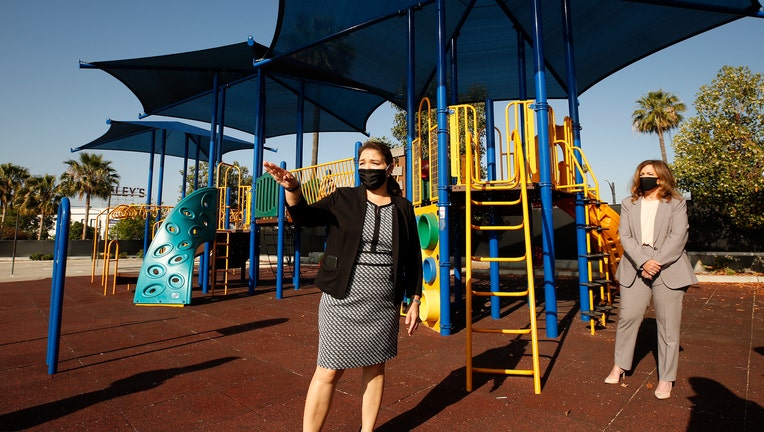 LOS ANGELES - In a study published in JAMA Pediatrics on July 30, researchers found that children “can potentially be important drivers of SARS-CoV-2 spread in the general population,” noting that ”children with high viral loads are more likely to transmit.”

The study researchers said their data was limited to the detection of viral nucleic acid, or viral RNA, which represents pieces of the coronavirus genetic makeup, but is different from the virus itself.

The researchers stated that high levels of viral RNA can contribute to the spread of COVID-19 within the human body.

The study coincides with ongoing discussions by health and education officials across the country as parents prepare to send their children back to school amid a widespread surge in coronavirus cases in the U.S.

Between March 23 and April 27, Chicago researchers performed nose swab tests on 145 patients who experienced mild to moderate COVID-19 symptoms within a week after their symptoms began.

The patients were divided into three groups: the first consisted of 46 children younger than 5; the second group was made up of 51 adolescents between 5 and 17 years old; and the third group consisted of 48 patients aged 18-65.

While the study authors stated that early reports have yet to find strong evidence that children are major contributors to the spread of COVID-19, school closures halted the potential for a large-scale investigation into schools as a source for community transmission.

The researchers found that while kids older than 5 had similar levels of the virus in their system as adults, children younger than 5 had “significantly greater amounts.”

Not knowing if children are infected makes it difficult for schools to reopen safely, many experts say. Scarce data on whether infected children — including those without symptoms — easily spread the disease to others complicates the issue, said Jeffrey Shaman, a Columbia University infectious disease specialist.

A National Institutes of Health-sponsored study seeking to answer that question and others is underway.

“We can’t assume that just because kids aren’t getting sick, or very sick, that they don’t have the virus,” Heald-Sargent added.

Currently, the U.S. Centers for Disease Control and Prevention says that children “do not appear to be at higher risk for COVID-19 than adults.”

The Trump administration says the science “is very clear,” but many doctors who specialize in pediatrics and infectious diseases say much of the evidence is inconclusive.

“There are still a lot of unanswered questions. That is the biggest challenge,” said Dr. Sonja Rasmussen, a pediatrics professor at the University of Florida and former scientist at the U.S. Centers of Disease Control and Prevention.

Several studies suggest, but don’t prove, that children are less likely to become infected than adults and more likely to have only mild symptoms.

An early report from Wuhan, China, where the outbreak began last winter, found that fewer than 2% of cases were in children. Later reports suggest between 5% and 8% of U.S. cases are in kids.

The CDC says 175,374 cases have been confirmed in kids aged 17 and under as of July 17, accounting for roughly 6% of all confirmed cases. The number of kids who have been infected but not confirmed is almost certainly far higher than that though, experts say, because those with mild or no symptoms are less likely to get tested.

One early study examining infections in children comes from a Wuhan hospital. Of 171 children treated there, most had relatively mild illness. One child died, and only three needed intensive care and ventilator treatment. Perhaps more worrisome was that 12 had X-ray evidence of pneumonia, but no other symptoms.

A CDC study involving 2,500 children published that same month, in April, echoed those findings. About 1 in 5 infected children were hospitalized versus 1 in 3 adults; three children died. The study lacks complete data on all the cases, but it also suggests that many infected children have no symptoms.

The CDC says COVID-19 can be more contagious and has been linked with more “superspreading” events than the flu, meaning it can quickly spread and infect lots of people.

A separate study published July 16 by the CDC based on research in households in South Korea found that the number of household contacts of COVID-19 patients “was high” for children between 10 and 19 years of age.

The study “is very carefully done, it’s systematic and looks at a very large population,” Dr. Ashish Jha, director of the Harvard Global Health Institute, told The New York Times. “It’s one of the best studies we’ve had to date on this issue.”

In that study, researchers analyzed data from 59,073 contacts of 5,706 coronavirus patients in South Korea between Jan. 20 and March 27.

“We detected COVID-19 in 11.8% of household contacts; rates were higher for contacts of children than adults,” the study authors wrote.