Super Bowl may not bring financial benefit of years past

TAMPA, Fla. - Tampa’s Raymond James Stadium will be the site of the Super Bowl next February 7 during uncertain times.

“Our hope is going to be to fill this stadium with fans,” said Jon Barker, the NFL’s head of live events. "But the smart thing to do is to prepare just in case.”

Barker and other NFL executives visiting Tampa on Tuesday are making contingency plans that range from a full stadium to no fans in the seats.

Barker says, depending on the status of the pandemic and the contingency plans selected, the anticipated economic impact on the Tampa Bay Area could be far less than before. The NFL claims the big game usually brings hundreds of millions of dollars to the host city.

“This is a global pandemic and the economic impact of this pandemic is widespread,” said Barker. “Certainly if we’re in that situation there will be economic impact. To try to qualify that number for you today is just impossible to do.”

He says the NFL’s decisions will be guided by medical experts, the CDC, and local health officials.

RELATED: Buccaneers ready to handle Super Bowl hype -- one week at a time

The uncertainty comes amid exciting plans for downtown Tampa's Riverwalk. Just after Gasparilla and leading up to the Super Bowl, nearly three miles of the Riverwalk will become part of the free Super Bowl Fan Experience. 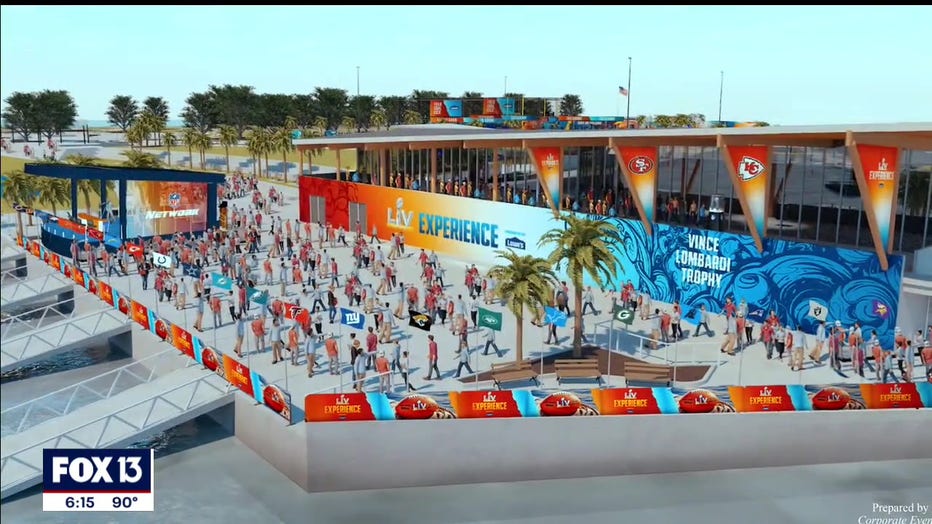 City parks will be filled with food, games, and concerts. But the NFL doesn’t know how the pandemic will impact fans who might travel to Tampa from out of town.

“We’re still expecting tens of thousands of fans,” says Nicki Ewell, the NFL’s director of live events. “We know this is a very robust area. St. Pete, Clearwater, and downtown Tampa residents can come down. We’re ready to receive you in a very safe and healthy manner.”

Ewell says work to expand infrastructure at Raymond James Stadium will begin January 2. Workers will begin building additional bathrooms and other buildings for the Fan Experience along the Riverwalk and in city parks Jan. 16.

Big projects like Midtown and buildings downtown race to be finished for the Super Bowl.

It will be the fifth time Tampa has hosted the event, the third at Raymond James Stadium. Under whatever contingency prevails on Feb. 7, Barker says Tampa will benefit.

“It is the single-day greatest sporting event in the world,” he said. “That’s not debatable. It’s just fact.”

NFL officials aren’t saying if they’ve decided on who will entertain at halftime and sing the national anthem, or if they will be performed at the stadium or on tape.

This year, who will play is just one of the questions surrounding the big game in Tampa.