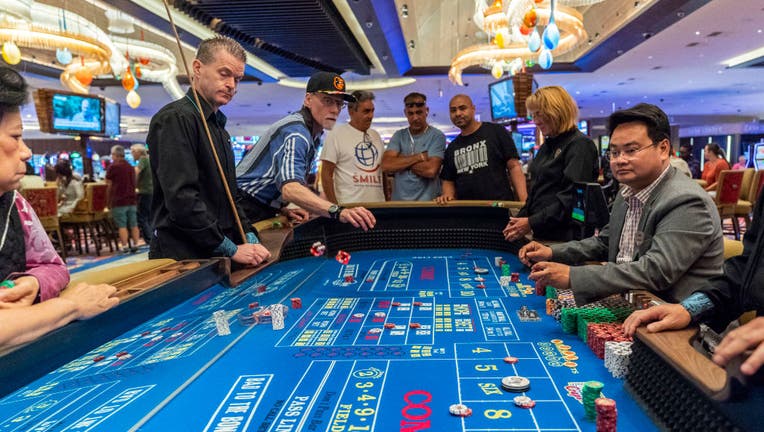 ATLANTIC CITY, NJ - JUNE 29: Patrons gamble inside the Hard Rock Hotel and Casino, previously the Trump Taj Mahal, on June 29, 2018 in Atlantic City, New Jersey. The Hard Rock is one of two new casinos that opened this week in the seaside resort, as

ATLANTIC CITY, N.J. - New Jersey's gambling revenue matched its all-time high of $5.2 billion in 2022, but only half that amount was won by casinos from in-person gamblers.

Figures released Tuesday by the New Jersey Division of Gaming Enforcement show the casinos, the horse tracks that take sports bets, and online partners of both types of gambling won $5.21 billion last year, up 10% from a year earlier and matching a level last seen in 2006. That was just before the advent of casino gambling in neighboring Pennsylvania sent New Jersey's gambling industry into a downward spiral that eventually led to the closures of five of the 12 casinos that were operating at the time.

But the 2022 number was reached with a hefty assist from internet gambling and sports betting — revenue streams that help contribute to the bottom line but are also heavily shared with third parties such as sports books and tech platforms.

Sarah Grady, assistant director of the Lloyd Levenson Institute at Stockton University, which studies the Atlantic City gambling industry, said it took an enormous amount of work by the casinos and state government to replicate the levels of 2006, when gambling revenue consisted solely of what was won from in-person gamblers.

"To compare these returns, it is important to consider how much the market has changed in the past 16 years," she said. "To achieve the returns we have today took a substantial expansion and diversification of the New Jersey gaming product to compete with increased competition from neighboring states."

That included the legalization of internet gambling in 2013, and the introduction of sports betting in 2018 following a U.S. Supreme Court ruling in a case brought by New Jersey that cleared the way for any state to offer legal sports betting; about two-thirds of the states now do.

"In 2022, the Atlantic City casino industry continued to face challenges, including the lingering effects from the pandemic, a difficult economy and high inflation," said Mark Giannantonio, president of the Casino Association of New Jersey. "As we move into a new year, Atlantic City casinos are committed to providing the best possible experience for our customers, which includes making significant investments that will continue to solidify Atlantic City’s position as a world-class resort destination with top-notch dining, shopping and entertainment offerings."

In-person winnings from gamblers finally surpassed pre-pandemic levels of 2019 — a long-sought goal of the Atlantic City casino industry. The casinos won $2.78 billion from in-person gamblers in 2022, compared with $2.68 billion in 2019.

But only three of the nine casinos — Borgata, Ocean and Resorts — had more in-person revenue in 2022 than they did in 2019.

Six casinos had more total gambling revenue in 2022 than they did the year before.

The casinos, sports books and internet gambling operations paid more than $526 million in taxes in 2022, nearly half of that coming from a 15% tax on online gambling revenue.

New Jersey's casinos and horse tracks took nearly $11 billion worth of sports bets in 2022, just a tiny bit more than they did in 2021.

Of that $11 billion, the casinos, tracks and their online partners kept $726 million as revenue after paying off winning bets and other expenses.