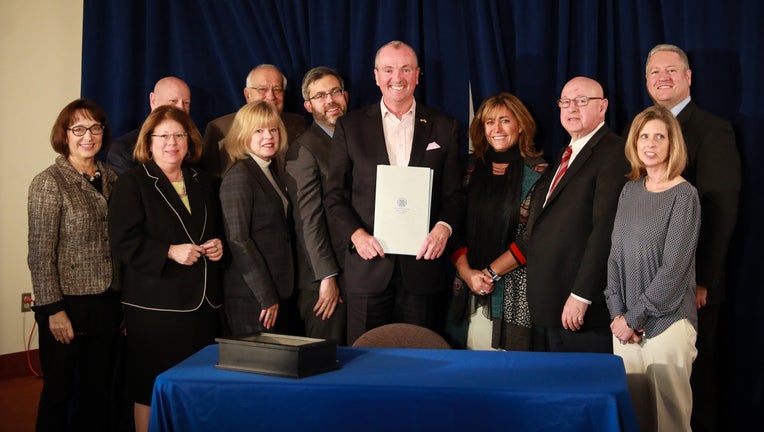 TRENTON, N.J. - New Jersey set lofty new goals Friday as Democratic Gov. Phil Murphy signed a bill boosting the number of electric vehicles in the state over the next five to 15 years and establishing an incentive of as much as $5,000 for people who buy them.

The legislation is being hailed by environmental groups who say New Jersey is setting an example for other states, as well as by auto retailers.

The law calls for 330,000 electric vehicles by 2025 and 2 million by 2035. It also calls for boosting the number of charging stations by offering a $500 incentive for people to install their own at home and calls for New Jersey Transit to transition buying only zero-emission buses by 2032.

“I don’t think any other state in America … has the aspirations like ours,” Murphy said, noting that California is by far a leader in electric vehicle incentives.

The new 330,000-vehicle goal in New Jersey is a huge increase over the number currently registered in the state.

There were about 6,600 registered electric vehicles in the state as of 2017, according to the most recent U.S. Department of Energy figures. That compares with about 6 million cars on the road in New Jersey the same year, according to the U.S. Transportation Department.

The bill further calls for electric vehicles to make up 85% of all cars sold or leased by 2040.

The legislation sets aside $30 million to pay for rebates. The money will come from a charge utility customers already pay on their bills. That charge represents about 4% to 5% percent of the average annual electric ratepayer’s bill. The utility bill charge brings in hundreds of millions of dollars to the state and is used to help low-income residents with their energy costs, among other uses.

New Jersey is far from the only state to offer incentives for electric vehicles.

Forty-five states and Washington, D.C., have incentive programs for certain hybrid and electric cars, according to the National Conference of State Legislatures. Utility companies, too, offer incentives, with companies in Colorado, Delaware, Florida, Georgia, Indiana, Kentucky, Maryland and Pennsylvania offering a $10,000 rebate to customers and workers who purchased a plug-in vehicle at specific car dealership, according to the conference.

But New Jersey’s new law stands out because of how comprehensive it is, according to Tittel and others.

The New Jersey Coalition of Automotive Retailers praised the bill when it passed the Democratic-led Legislature and said it addresses obstacles to electrical vehicles, namely their cost, which is typically $12,000-$15,000 more than comparable gas-powered vehicles.