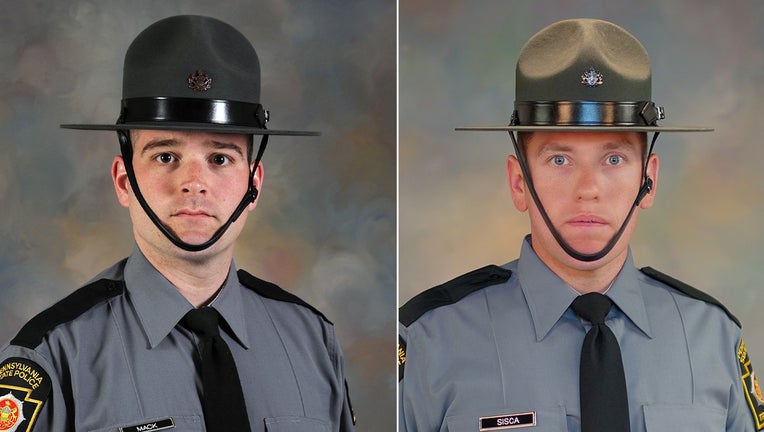 PHILADELPHIA - The Pennsylvania State Trooper Association is warning residents of solicitors pretending to raise money for the families of two troopers who were tragically killed in a crash in Philadelphia Monday morning.

The association issued their warning in a statement released Tuesday morning, just over 24 hours after Trooper Martin Mack, 33, and Trooper Branden Sisca, 29, were killed in the line of duty.

Officials say members of the PSTA and others have reported that they’ve received phone calls from people alleging to represent law enforcement organizations. In those phone calls, the callers claim they are raising money to benefit the families of Trooper Mack and Trooper Sisca.

"It’s disgusting to even have to issue this statement, but our members and others are reporting to us that they’re receiving phone calls from people alleging to represent law enforcement organizations that are raising money to benefit the families of our fallen brothers," said PSTA President David Kennedy. "The public should not make donations or provide personal information to these callers. The PSTA is the only official organization that represents and serves Pennsylvania state troopers, and we do not use telephone solicitation for fundraising."

Mack and Sisca were responding to a call for a man walking on the left side of the southbound lanes of I-95 near the Broad Street exit around 12:40 a.m. Monday. After making contact with the man, they were in the process of taking him into custody and putting him in their patrol car when a driver in an SUV fatally struck all three men.

Authorities say later Monday morning that they were conducting a ‘DUI-related’ investigation.

A law enforcement source tells FOX 29's Steve Keeley that state police had conducted a traffic stop involving the striking vehicle shortly before the crash. They say that stop was cut short because troopers were responding to reports of pedestrian walking on I-95.

2 Pennsylvania state troopers, civilian killed in crash on I-95 in Philadelphia

Two Pennsylvania state police troopers have been identified after they were killed in a crash on I-95 this morning along with a civilian they were trying to help. Authorities say they are conducting a 'DUI-related' investigation.

Officials say Trooper Mack, 33, joined the force in 2014 while Sisca, 29, only recently graduated from the academy and had enlisted in February of 2021. Sisca was also a Fire Chief of Trappe Fire Company in Montgomery County.