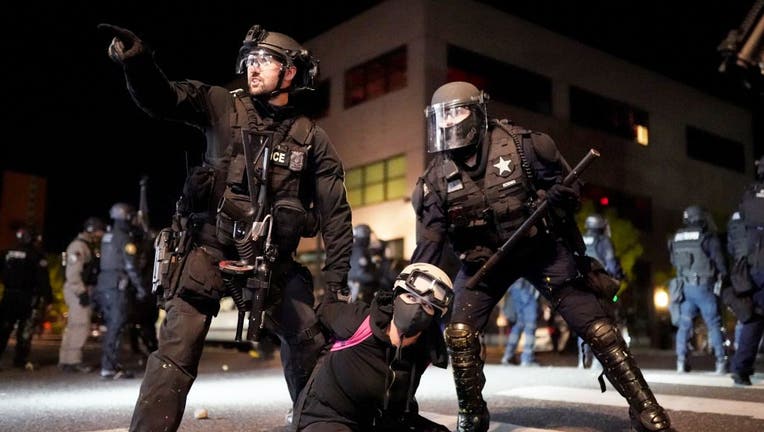 Portland police and Oregon State Patrol officers work together to arrest a protester in front of the Portland Police Bureau North Precinct on the 75th day of protests against racial injustice and police brutality on August 11, 2020 in Portland, Orego

PORTLAND, Ore. (AP) - Oregon state police will patrol Portland's nightly protests with help from officers from neighboring communities, seeking to tamp down on vandalism and violence following the fatal shooting of a right-wing Trump supporter as the city approaches 100 consecutive nights of Black Lives Matter demonstrations.

The plan, announced late Sunday by Democratic Gov. Kate Brown, also creates a group including Mayor Ted Wheeler and local Black leaders to help chart the path forward for Portland, a liberal city struggling to regain its footing under a national spotlight.

President Donald Trump has made Portland and its Democratic leadership a frequent target and the centerpiece of his “law and order” re-election campaign theme. He demanded that local and state leaders call in the National Guard after Saturday's fatal shooting.

A supporter of the right-wing group Patriot Prayer was killed amid skirmishes between Trump supporters who led a car caravan through the city and Black Lives Matter protesters who had gathered for another night of demonstrations.

Police have not made an arrest in the case. The victim was identified by the founder of Patriot Prayer as Aaron “Jay” Danielson of Portland.

“Portland is a mess, and it has been for many years. If this joke of a mayor doesn’t clean it up, we will go in and do it for them!” Trump tweeted Monday, a day after tweeting that the mayor was a “fool” and a “weak and pathetic Democrat mayor.”

Brown has so far declined to send the National Guard to Portland but instead announced a coalition of multiple law enforcement agencies to handle the short-term crisis. In a statement, she said right-wing groups like Patriot Prayer had come to Portland “looking for a fight" and vowed to stop more bloodshed on the city's streets.

“We all must come together — elected officials, community leaders, all of us — to stop the cycle of violence,” she said. “But this is only the first step. Real change will come from the hard work to achieve racial justice. And it starts with all of us listening to each other and working together."

Hundreds of trucks filled with supporters of US President Donald Trump drove through the city of Portland on Aug. 29. (Credit: @IsaiahSouza via Storyful)

Some Black community leaders were upset with the plan to put more officers on the streets. Portland police have come under fire for using tear gas against protesters and have been criticized for being overly aggressive.

“If you’re just there, the odds of getting arrested at this point are almost so high as to the point of being guaranteed,” said Shanice Clarke, one of the founders of the Black Millennial Movement and a frequent protester.

Clarke also criticized a news conference held by Wheeler on Sunday, when he engaged directly with Trump in what she called “political theater.”

The mayor needs to do more than “just showing up to a press conference and saying it’s Trump’s fault” for Black people to feel they are being listened to in Portland, she said.

State police also took over patrols in Portland in July following two weeks of massive demonstrations against the presence of federal agents in the city. This time, they will also provide local police with more than two dozen body cameras.

Local agencies who will be assisting Portland police — including sheriffs deputies from two more conservative, suburban counties — will be indemnified from any legal liability by the city under the plan and will likely have their expenses covered by Portland, Brown said.

RELATED: Protesters clash with federal agents in Portland outside US immigration building

Police have released little information about Saturday's fatal shooting, and Chief Chuck Lovell said Sunday that investigators are still gathering evidence. Earlier, the agency released a plea for any information related to the killing, including videos, photos or eyewitness accounts.

Patriot Prayer is based in Washington state and was founded in 2016. Since early 2017, its supporters have periodically come to Portland to hold rallies for Trump, ratcheting up tensions long before the national outrage over the police killing of George Floyd.

Many of the Black Lives Matter protests in Portland have ended with vandalism to federal and city property, including the federal courthouse and City Hall. In July, Trump sent more than 100 federal agents from the Department of Homeland Security to safeguard federal property — a move that instead reinvigorated the protests.

Thousands of people clashed with the federal agents each night for two weeks.

Those agents withdrew July 31 but smaller nightly protests have continued in pockets of the city. More than 600 people have been arrested since late May.