SPRING GARDEN - Parents are frustrated about overcrowding at two Philadelphia public schools in their South Philadelphia neighborhood.  They spoke at a meeting Thursday evening with district officials trying to resolve the issue. 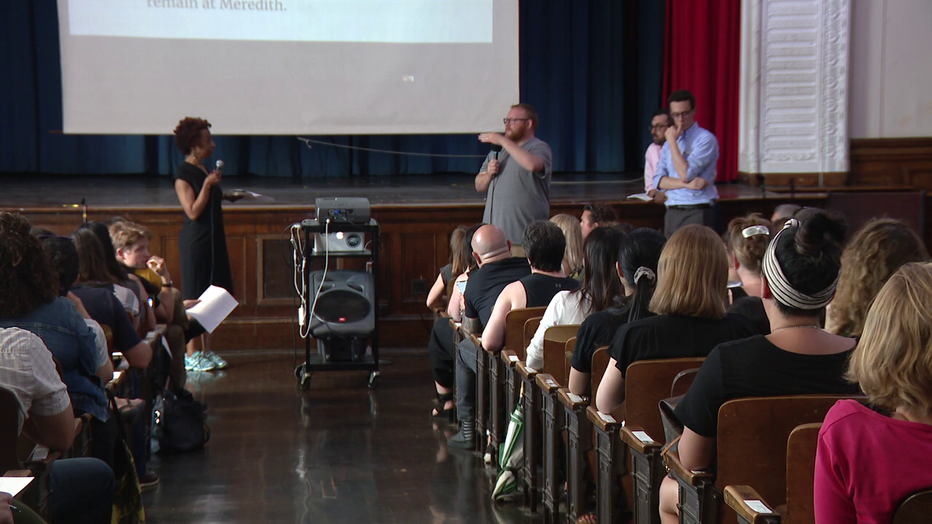 “We just looked for top schools in Philadelphia public and this is what led us to Meredith,” said Kevin Blake.

He says he moved his family to Queen Village in March so his daughter could attend kindergarten at William Meredith. He was later told Meredith was full with a waiting list and his daughter would go to Nebinger.  He was then told she may not get in there either.  Last week Blake and other parents got received an email.

“They told the parents that their siblings and certain people in the catchment were no longer going to be able to go to the schools whether it was Meredith or Nebinger. They were told, due to overcrowding, there were going to be changes and students would have to go to a new school,” said Blake.

Dwayne Peel and his wife Keiya are also in a bind.  Their oldest daughter is in 8th grade at Nebinger but they’ve been told they could lose sibling preference, meaning their younger daughter might not be able to attend that same school for kindergarten in the fall.

"They haven’t given us a definitive date as to when they’ll make the decision who got in, who didn’t get in,” said Dwayne.

“We can’t plan properly because we have to get uniforms and such and they have to have the logos put on them. That takes time,” said Keiya.

Some feel they still don't have an answer to explain why Nebinger is being used as an overflow school for Meredith.  But, advocates from both schools are optimistic.

"Multiple students from multiple schools were enrolled in the same spots and we're really excited because the district is committed to fixing the problem. They've also committed to transparency and bringing us into the process more," said Ben Schindler with Nebinger’s School Advisory Council.

District officials were also asked whether the overcrowding could be remedied with modular trailers outside the schools.  They said that would take months and wouldn't likely happen before the start of school.

Parents say they were told they could have a solution after the July 4th holiday.