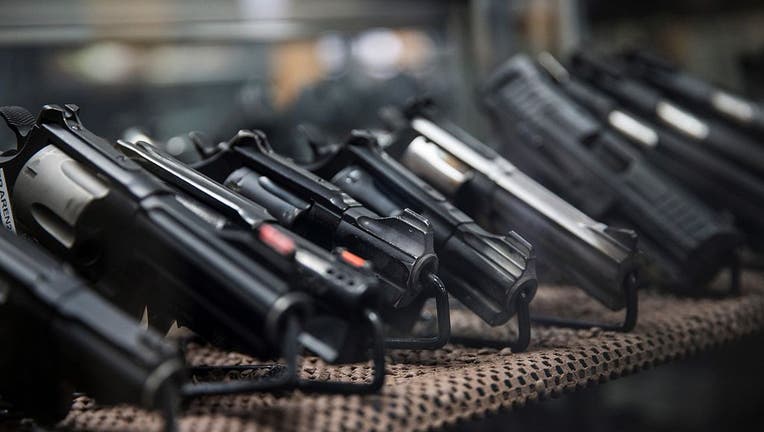 WASHINGTON, USA - JANUARY 9: Assorted pistols on display that customers can rent to use on the range at Blue Ridge Arsenal in Chantilly, Va., USA on January 9, 2015. (Photo by Samuel Corum/Anadolu Agency/Getty Images)

The Judiciary Committee action led the speaker to have another panel take over the bills after Democrats tried to force consideration of the proposals.

The vote, after a testy exchange between the two parties during a Judiciary Committee meeting, concerned proposals regarding safe gun storage, an assault weapons ban, a red flag bill and a measure to give local governments power to enact their own protections.

All Republicans and about half of the Democrats voted to send the bill package back to Speaker Bryan Cutler, R-Lancaster, with a recommendation that he pass them over to the Local Government Committee. A subsequent House floor vote on Cutler's "re-referral" broke down nearly on partisan lines, with only Rep. Todd Stephens, R-Montgomery, voting with the other party.

Democrats who voted with the GOP said they did so in hopes the proposals might somehow advance in the Local Government Committee, believing there is no hope for action on the bills in Judiciary.

"These are efforts that are supported by 80%, 90% of our citizens," said the committee's ranking Democrat, Rep. Tim Briggs of Montgomery County. "And we're going to punt."

Briggs told Republicans that when another mass shooting happens without action by lawmakers, "blood's on your hands." The chair, Rep. Rob Kauffman, R-Franklin, responded that "the blood is on the hands of the criminals" using the guns to hurt people.

"Instead of taking a vote to advance these bills, they are just delaying debate on this legislation," Wolf said in a statement. "Gun violence won’t delay. Every day the Republicans stall, more people are at risk."

Across the Capitol, Democrats in the Senate forced a procedural vote to try to bring red flag legislation to the Senate floor and out of committee where Republicans have kept it bottled up.

"If we prevent one murder with this legislation, isn’t it worth it? I think it is," said Sen. Wayne Fontana, D-Allegheny. Republicans voted it down in a party-line vote after accusing Fontana of violating chamber rules by discussing details of the bill during his floor remarks seeking a procedural vote.

Krasner issued a statement that linked the impeachment effort to the Jan. 6, 2021, violent siege of the U.S. Capitol as Republicans' "ongoing and increasingly desperate attempts to overturn elections they can't win."

"Democracy- and freedom-loving Pennsylvanians will not be fooled by these anti-democratic efforts to de-value Philadelphia’s diverse votes," Krasner said. "Philadelphia is not Pennsylvania’s colony. Our votes count in full, not as 3/5ths of a vote."

Three Pennsylvania House Republicans, who do not represent Philadelphia, have announced plans to draft articles of impeachment against Philadelphia DA Larry Krasner.