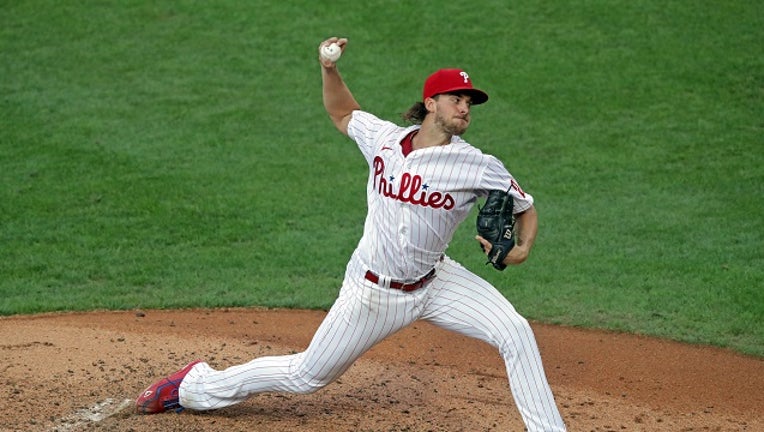 PHILADELPHIA - Aaron Nola got enough run support that even another dismal performance by the bullpen couldn't ruin.

Nola (1-1) allowed one run, two hits and struck out 10 in eight innings. He threw just 89 pitches but was denied an opportunity for his first career complete game in his 130th start. Two relievers gave up seven runs in the ninth.

“Obviously, I wanted to,” Nola said about finishing the game. “I understand where they're coming from, for sure.”

Phillies manager Joe Girardi said he removed Nola because there have been many injuries to pitchers across the majors.

“My job is to protect players from themselves,” he said. “I feel bad for pulling him.”

The Phillies had lost Nola’s last nine starts, scoring only 27 runs combined in those games.

Roman Quinn, Jean Segura and J.T. Realmuto added solo shots for Philadelphia, which bounced back after getting swept in Sunday’s doubleheader to earn a split of the four-game series.

The group, which calls itself the “Phandemic Krew,” has grown from a few people to more than 30. Some folks bring ladders to peek into the ballpark and others sit on lawn chairs. They watch the game on a television hanging on a brick wall in Ashburn Alley out in left-center field.

Gregorius made it 10-1 during a seven-run second inning that chased Newcomb. Quinn started the inning with a liner out to left. After Realmuto’s RBI single ended Newcomb’s night,

Travis d’Arnaud hit a solo homer off Nola. Johan Camargo connected off Nick Pivetta, who yielded six runs and recorded just one out in the ninth. Austin Riley hit a two-run shot off Trevor Kelley before the side-winding righty got the final out.

“They keep banging away and coming back,” Braves manager Brian Snitker said. "It was a pretty big hurdle, but if you can keep a game doable or relatively close in this ballpark, it’s one of those places that you never know what might happen. It can be haunted here sometimes in that ninth inning. It was good to see them come back and show some life. You just never know.”

Nola has 14 double-digit strikeout games in his career and two in a row for the second time. He fanned 12 in a 3-1 loss to the Yankees last Wednesday.

The Phillies had four homers and scored 10 runs within the first two innings of a game for the first time in club history, according to Elias Sports Bureau.

Phillies: RHP David Robertson and LHP Ranger Suárez are throwing at the team’s complex in Clearwater, Florida. Robertson, a former closer, is returning from Tommy John surgery. Suárez tested positive for COVID-19 before the season. ... Harper said he's fine after getting hit on the right hand by a pitch. The ball hit part of a protective covering he wears. Harper stayed in the game.