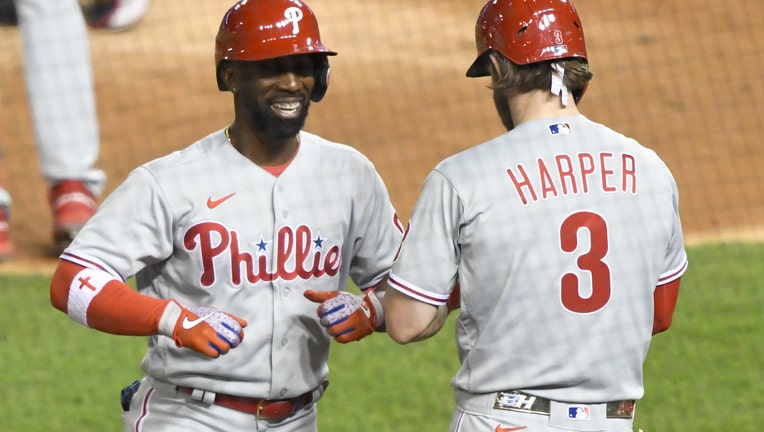 WASHINGTON, DC - SEPTEMBER 23: Andrew McCutchen #22 of the Philadelphia Phillies celebrates a solo home run in the eight inning with Bryce Harper #3 during a baseball game against the Washington Nationals at Nationals Park on September 23, 2020 in Wa

CLEARWATER, Fla. - For Bryce Harper and the rest of the Philadelphia Phillies, the time is now.

The Phillies are aiming to end a nine-year postseason drought. They feel they have the players to contend. Now, they just have to do it.

"We need to have a sense of urgency with this team," Harper said. "We can’t keep saying: ‘Next year, next year.’ When opening day starts, we need to win games. We can’t fall behind, especially in this division because once we find ourselves behind, it’s tough to dig out. We have to beat the teams we need to, and try to beat the good teams, too. Hopefully get a little lucky at times and be there at the end."

The Phillies fell one win shy of qualifying for the postseason in the pandemic-shortened 2020 season despite a losing record. They went 1-7 down the stretch and finished 28-32 in Joe Girardi’s first season as manager. It was the third straight year the team collapsed in September.

Harper, Realmuto and Gregorius are the heart of an offense that tied for fifth in runs last season. Andrew McCutchen, Rhys Hoskins, Alec Bohm and Jean Segura make the lineup deep top to bottom.

Dombrowski also added several relievers to improve a bullpen that had a 7.06 ERA last season and signed veteran starters Chase Anderson and Matt Moore to strengthen the rotation.

"We have the players to get there," Gregorius said about the World Series.

When free agency began, it appeared Realmuto was heading to a new team despite Harper and nearly every Phillies fan imploring management to "Sign J.T." Once Dombrowski took over, it became a top priority. Realmuto’s average annual value of $23.1 million is the highest in baseball history for a catcher. He fractured a bone at the base of his right thumb at start of spring training but is expected to be ready to start the season.

The only spot in the lineup up for grabs is center field. Odubel Herrera, a 2016 All-Star who hasn’t played since he was suspended in 2019 following his arrest on domestic violence charges, has played well and appears to be the leading candidate.

Scott Kingery and Roman Quinn are also competing for the job along with 2017 first-round pick Adam Haseley and 2016 No. 1 overall pick Mickey Moniak. Haseley sustained a groin injury that will force him to miss the start of the season. Moniak will likely begin at Triple-A.

Aaron Nola and Zack Wheeler are a formidable 1-2 punch in the starting rotation. Both have had dominant stretches and the Phillies are hoping they can be elite more consistently. Nola finished third in NL Cy Young Award voting in 2018 and seventh last year. Wheeler lived up to expectations in his first season in Philadelphia after getting a $118 million, five-year contract.

The revamped bullpen features a mix of hard-throwing relievers and veterans who know how to get key outs. The Phillies blew 21 leads last season, including eight leads of at least three runs. Archie Bradley, Jose Alvarado, Brandon Kintzler and Tony Watson join Hector Neris and Connor Brogdon to give Girardi more options.

The bench got an upgrade with the addition of Brad Miller, who tied for a team-high seven homers with St. Louis last season, and Matt Joyce.

Spencer Howard, the team’s top pitching prospect, threw 24 1/3 innings last year and had a 5.92 ERA. But Howard remains a big part of the pitching plans, even if he doesn’t begin the season in the majors. Howard could be used in a variey of ways, including the bullpen.

Moniak, who was 3 for 14 last season, has opened eyes with an impressive spring and could end up playing regularly at some point this season.