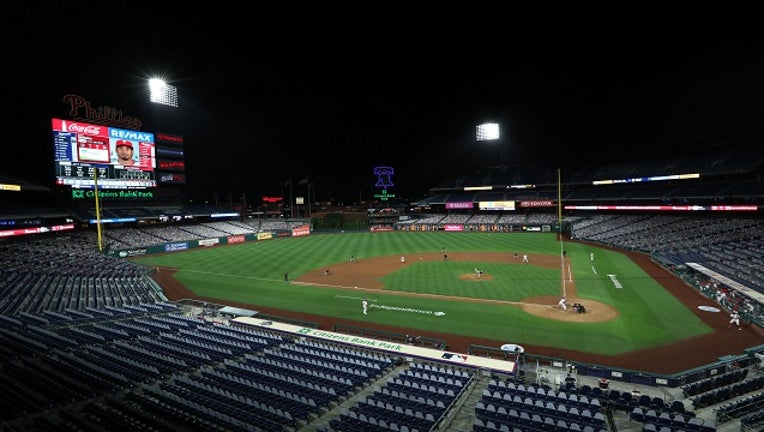 A view of the field from the seats on the third base side during a game between the Philadelphia Phillies and the Washington Nationals at Citizens Bank Park on September 1, 2020 in Philadelphia, Pennsylvania. The Phillies won 6-0. (Photo by Hunter Ma

PHILADELPHIA - Fans may be allowed in the stands at the Phillies home opener on April 1.

Philadelphia Health Commissioner Dr. Thomas Farley says the Phillies, Sixers and Flyers all want fans back and are seeking the city’s approval.

"It’s likely there would be some fans in the stands for the Phillies home opener, but how many is not just up to us but what the state decides," Farley said.

"I had COVID. I was in the hospital for two months and I just don’t want to relive that I’m just thankful I’m alive," Dorothy Miller said

Dorothy Miller became one of the city residents to be vaccinated at the first, city-run mass vaccination site for elderly residents or those with high-risk illnesses.

Philadelphia is planning three of these first-dose clinics weekly over the next three weeks for those who’ve registered with the city.

"This is one more step towards ending this epidemic," Farley said during a Tuesday press conference.

Vaccinations have begun for another group: city teachers, some of whom are supposed to return to classrooms Monday as a mediator on building safety meets with the district and teachers’ union.

Hite calls the talks a "fluid process" for a system serving 120,000 students who’ve not been in school since March.