The Pine Hill School District held an&nbsp;early graduation for a student whose father was battling Stage 4 lung cancer. Two days after the graduation, the proud father lost his battle with cancer.

"He was proud. He was proud. Thumbs up he gave. Thumbs up. He was in a lot of pain," said Anna Sponsler about her husband, Jack. She showed FOX 29's Shawnette Wilson pictures that capture a bittersweet moment between a father and his only son.

Graduation happened differently for 18-year-old Jake Sponsler.  Instead of with his classmates on the athletic fields of his school Overbrook High in Pine Hill, it happened at the home he shared with his father, Jack, and Jack's wife Anna. 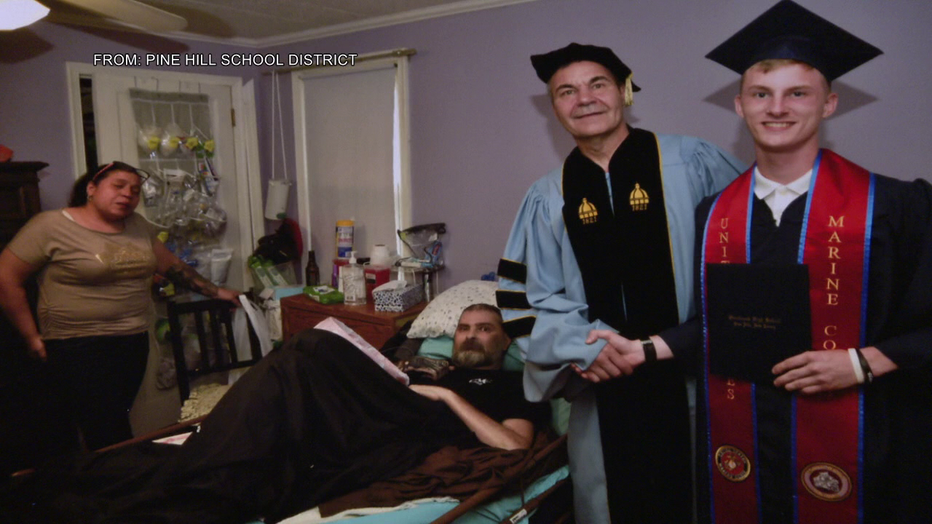 "Jack was his hero, his best friend and his cheerleader," said Anna. Anna was concerned that Jack wouldn't be there to cheer on his son for graduation June 17. Jack was battling Stage 4 lung cancer that had spread throughout his body. He was set up for hospice at home and Anna was worried.

"I wanted him to share that memory with his dad. We'd already been told that you don't have that much longer," said Anna. So she asked the school if they could do an intimate ceremony at home with Jack bedside as his son received his diploma. It happened Memorial Day weekend.

"They came in with full ceremony gear. Jake was dressed, also. We went in the room and they said what they say when someone graduates. We just shared that moment with Jack. It was a beautiful moment," said Anna. Two days later, 41-year-old Jack lost his battle with cancer.

"(Do you think one of the happiest moments for your husband and your son?) That moment? Absolutely. Absolutely,” said a tearful Anna.

Dr. Kenneth Koczur has been the superintendent of the Pine Hill School District for 18 years and says this is one of the most memorable moments of his career.

"We were presenting the diploma and Jake held the diploma up and Jake said are you proud of me and a little smile came to Jack's face and he said I pushed you and I'll never ever forget that in his face,” said Superintendent Koczur.

"It's very important for them to have that moment as his only child and for him to see that he did his job as dad," said Anna.

FOX 29 didn't get to talk to Jake. He joined the Marines and is in basic training in South Carolina but FOX 29's Shawnette Wilson is told he has a graduation picture with his dad there with him.