A plane with several passengers on board headed to Boston crashed, but fortunately, everyone survived. The National Transportation Safety Board announced it is looking into the cause and FOX 26’s Damali Keith has more.

WALLER COUNTY, Texas - While everyone onboard a plane that crashed in Waller County, Texas is safe, the investigation into its cause remains underway.

It's a shock after flames from the decimated aircraft sent large, dark plumes of smoke into the air that could be seen for miles.

A day after a plane crash in Waller County that was headed to Boston, officials with the National Transportation Safety Board gave an update on the investigation.

During a press conference Wednesday, officials with the National Transportation Safety Board said it was currently in the process of gathering evidence from the crash. Additionally, crew members and passengers have also been interviewed and are examining maintenance records for the plane.

According to the Federal Aviation Administration, the plane rolled through a fence and caught fire in a field while attempting to depart from Houston Executive Airport Tuesday shortly after 10 a.m.

Emergency crews responded to a plane crash in Waller County that injured multiple passengers. Crews worked for over an hour to put out the flames.

Officials tell FOX 26 that 21 people were onboard the plane, which went down near the intersection of Morton Road and FM 2855.

All occupants were able to make it off the plane, and only two were taken to Memorial Hermann Hospital in Katy for minor injuries.

SkyFOX was over the scene and showed the crash near the Henriksen Jet Center airstrip as firefighters battled the flames.

Emergency crews are on the scene of a fiery plane crash in Waller County, Texas Tuesday morning. 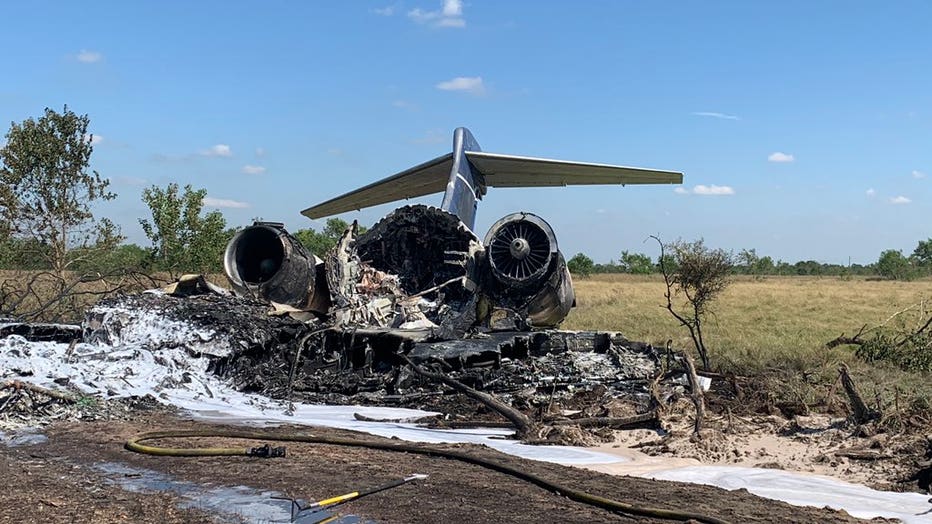 The aircraft has been identified as a McDonnell Douglas MD-87, which has fixed wings and two engines. It is registered to 987 Investments, LLC.

The plane was on its way to Boston, where the Houston Astros were set to face the Red Sox in Game 4 of the American League Championship Series.

The Federal Aviation Administration and National Transportation Safety Board are investigating. The NTSB, as of Wednesday afternoon, was unable to give details or preliminary information on what they have found so far.

Meanwhile, Michael Graham, Boardmember for the NTSB asked the public for assistance with the investigation by coming forward with any photos and videos of the plane crash if they have it by emailing witness@ntsb.gov

"We are extremely thankful that there were no fatalities," Graham said. "When you look at the video of the aircraft on fire and on the ground and what's left of the plane, we're very thankful