A plane carrying 28 people crashed Tuesday, apparently as it came in for a landing in bad weather in Russia’s Far East, and everyone aboard was feared dead.

Wreckage from the An-26 was found on a coastal cliffside and in the sea near the airport in the town of Palana, according to officials. The plane was on approach for a landing in fog and clouds when it missed a scheduled communication and disappeared from radar, officials from the Kamchatka region said.

The plane "practically crashed into a sea cliff," which wasn’t supposed to be in its landing trajectory, according to Sergei Gorb, deputy director of the company that owns the aircraft, Kamchatka Aviation Enterprise.

The plane was in operation since 1982, Russian state news agency Tass reported. Alexei Khabarov, director of Kamchatka Aviation Enterprise, told the Interfax news agency that the aircraft was technically sound before taking off from the city of Petropavlovsk-Kamchatsky.

According to Russian media reports, none of the six crew members or 22 passengers on board survived. The head of the local government in Palana, Olga Mokhireva, was among the passengers, spokespeople of the Kamchatka government said.

However, no bodies were found yet, and there was no official confirmation of the reports. 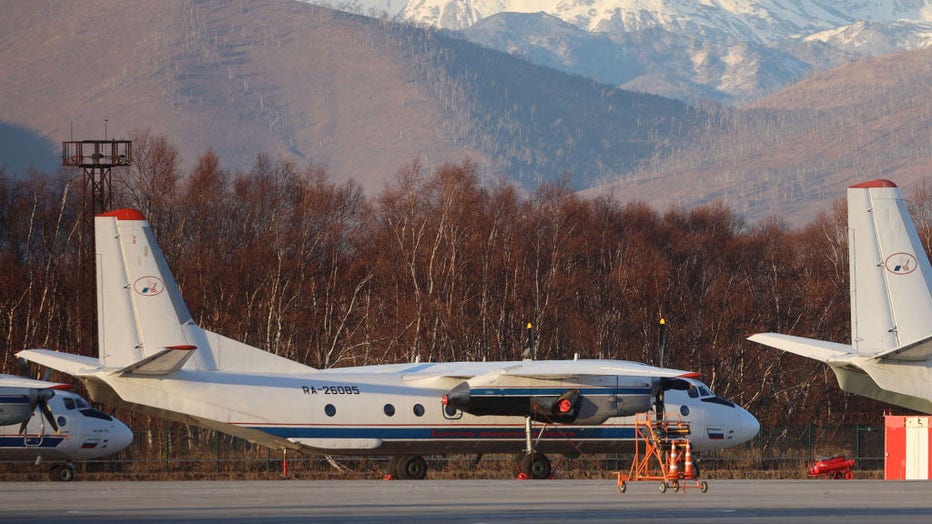 FILE - Pictured in this file image dated Nov. 17, 2020, is an RA-26085 Antonov An-26 passenger aircraft at the Petropavlovsk-Kamchatsky Airport (Yelizovo Airport), Kamchatka Territory. (Photo by Marina LystsevaTASS via Getty Images)

Russia’s state aviation agency, Rosaviatsiya, said that parts of the plane were found about 3 miles (5 kilometers) from the airport’s runway. Part of the fuselage was found on the side of a mountain, Russia’s Pacific Fleet told news agencies, and another part was floating in the Okhotsk Sea.

A criminal investigation was opened, as is typical.

A search-and-rescue mission was underway in the mountainous area, but the work was suspended after night fell, the governor of Kamchatka, Vladimir Solodov, said.

"The site itself is difficult to access, a helicopter can't land there," Solodov said in video posted on the regional government's website. "Because of adverse weather conditions, high waves, the rescue operation had to be temporarily suspended. It will resume tomorrow morning."

Solodov added that a group of government officials including Transport Minister Vitaly Savelyev will head to Palana on Wednesday.

In 2012, an An-28 plane belonging to Kamchatka Aviation Enterprise crashed into a mountain while flying the same route as Tuesday's flight. A total of 14 people were on board and 10 of them were killed. Both pilots, who were among the dead, were found to have alcohol in their blood, Tass reported.