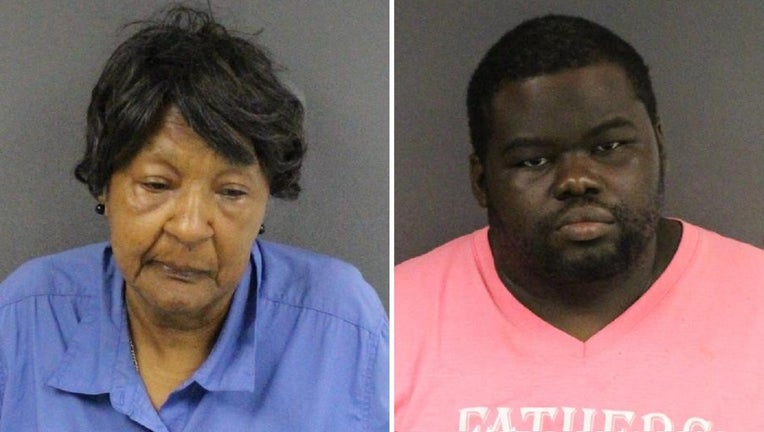 Left to right: Eudean McMillan, 74, was charged as an accomplice to murder. Darryl Parker, 37, was charged with murder and weapons offenses.

TRENTON, N.J. - A 74-year-old woman, a 37-year-old man and a 15-year-old boy have been arrested in connection with a deadly double shooting at a Trenton laundromat, prosecutors announced Tuesday.

The incident, which was captured on surveillance video, occurred around noon Monday at the Liberty III Laundromat on Chambers Street.

Officers responded to the scene and found 21-year-old Geovahnie Fanfan in the laundromat's rear office suffering from multiple gunshot wounds. Fanfan was transported to a local hospital, where he was pronounced dead a short time later.

A second victim, a 16-year-old boy, was hospitalized in critical condition.

Further investigation revealed that a woman known as "Mama Dean" was responsible for the shooting, according to prosecutors. Investigators said a small group of people attacked a man, later identified as 37-year-old Darryl Parker, inside the laundromat's side entrance. Individuals in the group allegedly kicked and threw objects at Parker, who had been knocked to the ground.

An elderly woman, later identified as 74-year-old Eudean McMillan, allegedly walked outside the laundromat prior to the beating and returned holding a handgun.  McMillan is accused of shooting at the individuals who were attacking Parker as they tried to flee the scene. At that time, the 16-year-old boy was allegedly struck by McMillan.

Prosecutors said Fanfan, who was allegedly part of the group that initially attacked Parker, fled to the back of the laundromat and hid inside the office area. He was left exposed, however, by a large open counter area. McMillan, according to prosecutors, then handed her gun to Parker, who allegedly walked to the open counter area, leaned over and fired at Fanfan.

The group began to walk toward the laundromat's exit when the handgun was allegedly taken by a 15-year-old Trenton boy, who walked back toward the counter area and also fired the handgun at Fanfan, striking him multiple times as he lay on the ground.

After the shooting, McMillan, Parker and the 15-year-old male allegedly fled the scene in McMillan’s vehicle.