In the footage, the father and son clung to a cooler as they struggled to stay afloat. The department said that the officers arrived to find only a small portion of the boat’s bow was above water.

BOSTON - In the nick of time, the Boston Police Department’s harbor patrol unit rescued a father and son who were desperately clinging to a cooler at the outermost edge of Boston Harbor after their lobster boat sank.

Officers Stephen Merrick and Garrett Boyle responded to a call for a boat taking on water at about 6:30 p.m. Wednesday near Graves Light Station, police said in a statement. The privately owned lighthouse is on a rocky islet about 9 miles (14.5 kilometers) from the coast.

On approach, the officers only saw a small portion of the vessel Glory Days' bow above water, but as they got closer they saw the two men holding on to the bobbing blue cooler.

"You could see the fear in their face," Merrick said. "They were cold. They looked very tired and weak."

The dramatic rescue was caught on police body camera video.

"We're so weak," the younger man is heard saying.

He then asked the officers to rescue his 76-year-old father, who was wearing a life vest. 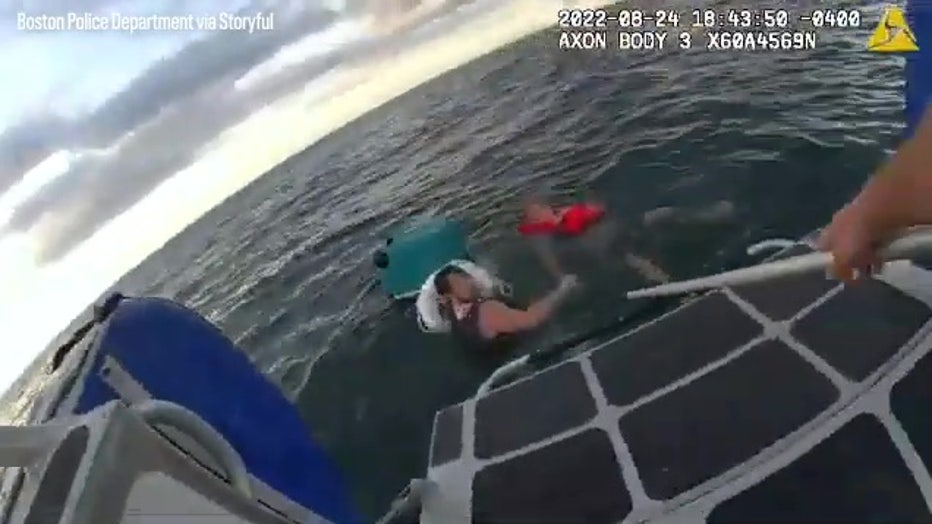 The younger man, who was holding onto a life ring, was then pulled onto the police boat by the officers.

RELATED: Chihuahua rescued from cliff 3 days after being reported missing

The men said their boat’s 28-foot (8.5-meter) engine got tangled in lobster lines and failed. The current pushed the boat onto the rocks and punctured the hull, police said.

The men were taken to shore where emergency medical technicians treated them for minor injuries. Their boat was towed from the scene.