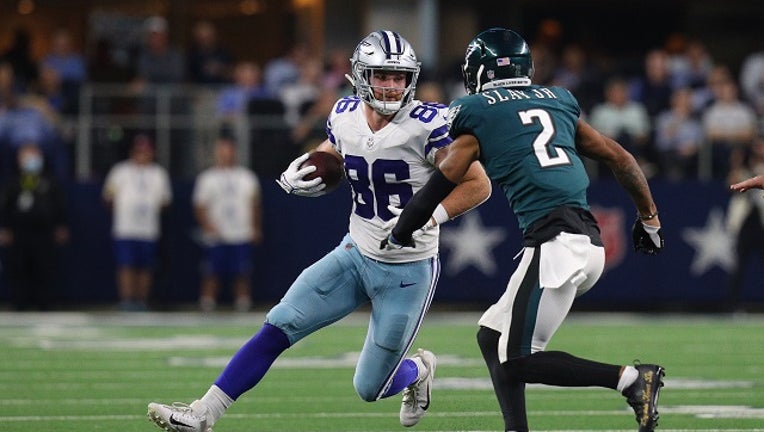 ARLINGTON, TEXAS - SEPTEMBER 27: Dalton Schultz #86 of the Dallas Cowboys tries to get around the the tackle of Darius Slay #2 of the Philadelphia Eagles after a second half catch at AT&amp;T Stadium on September 27, 2021 in Arlington, Texas. (Ph

ARLINGTON, Texas - Jalen Hurts is 0-2 as an NFL quarterback in his home state of Texas. This time in prime time, the Philadelphia Eagles never really had much of a chance even though the young starter again finished with some impressive numbers overall against the Dallas Cowboys.

Much different than his fast go-ahead start as a rookie at AT&T Stadium exactly nine months earlier.

"This didn’t go my way, things didn’t go our way," Hurts said. "It’s tough. All I can do is take ownership for how I played, and how it affected the team in the end."

Hurts threw an interception on the first Eagles drive Monday night, had to scramble across his own end zone to get rid of the ball on the second, and there was the pick returned for a touchdown less than a minute into the second half of a 41-21 loss.

"This one’s on me ... I take responsibility for how this game went," Hurts said.

"Obviously we all know that’s not true. Whenever you get beat like that, it’s everybody. Losses like that don’t happen just because of one guy," veteran center Jason Kelce said. "But that is the way you would expect Jalen Hurts to feel. Bottom line is the leaders that are really good players ultimately feel that they completely control the situation. ... We’ve got to play much much better across the board."

When the Eagles (1-2), who had 13 penalties, went for it on fourth-and-9 from their own 44 with 8 1/2 minutes left in the game, Hurts scrambled out of the pocket before getting swarmed by four defenders and getting sacked for the fourth time.

The former Alabama and Oklahoma quarterback, who grew up a couple of hundred miles away in the Houston suburbs, finished 25 of 39 passing for 326 yards with two late touchdowns and had his first two picks of the season. Hurts also had the carries on nine of the Eagles’ 12 rushing plays, running for 35 yards.

"The first half just with how that went without getting a lot of plays, those numbers get skewed sometimes," coach Nick Sirianni said. "When you don’t have that many plays in the first half, because you have penalties that stop drives, defense was on the field quite a bit, then you’re in a position in the second half where you’re down two scores the whole time."

Two days after last Christmas, Hurts threw an 81-yard TD to DeSean Jackson for a 14-3 lead over the Cowboys less than 10 minutes into the game. Hurts finished 21 of 39 for 342 yards, but did have two interceptions and was sacked three times in a loss to a Dallas team without an injured Prescott.

The Eagles never led this time, and only tied the game after the initial interception by Hurts actually set up their first touchdown — a fumble recovery in the end zone by Eagles 310-pound defensive tackle Fletcher Cox.

After hitting tight end Dallas Goedert for a 38-yard gain on his first pass and then having a short completion, Hurts threw a pass toward the end zone, but it was underthrown to Jalen Reagor and picked off by Anthony Brown, who went down at the 1. Two plays later, Javon Hargrave sacked Dak Prescott in the zone, knocking out the ball that was recovered by Cox without it ever touching the ground.

Prescott threw the first of his three TDs and Ezekiel Elliott ran for his second score to put the Cowboys up 20-7 midway through the second quarter. At that point, Dallas had 19 first downs and a 262-55 edge in total yards, with 38 of the Eagles yards coming on the first pass by Hurts that was their only first down.

Trevon Diggs’ 59-yard interception return for a touchdown put the Cowboys up 27-7.

The Eagles then went 90 yards in eight plays, a drive that ended with Hurts’ 3-yard TD throw to Zach Ertz. In the final minutes, Hurts was on the run again, sprinting to the right and throwing just before he got to the sideline to hit Greg Ward for a 15-yard touchdown.