FOX 29's Joyce Evans has more on the bill that hopes to add a provision to Philadelphia's property maintenance code requiring landlords to notify tenants about past bed bugs issues.

PHILADELPHIA - A proposed bill would require landlords to tell you if a place had a history of bed bugs in Philadelphia.

Terminix released its list of the top 50 bed bug-infested U.S. cities in June. The pest control provider reported Philly as having the worst bed bug problem in the country.

Apparently these creepy bloodsuckers have been crawling their way through some city apartment buildings, prompting tenants to cry out to city hall for help to stop them now.

"All we need to do is make sure bedbugs are identified quickly and treated quickly. We can turn this epidemic around," Dr. Levy said.

Dr. Levy hopes his testimony about his bed bug research may help at city council's L&I committee public hearing on Councilman Mark Squilla's bill to add a provision Philadelphia's property maintenance code requiring landlords to notify tenants about past bed bugs issues and remedies, and specific rules to identify and exterminate infestations in a timely fashion. 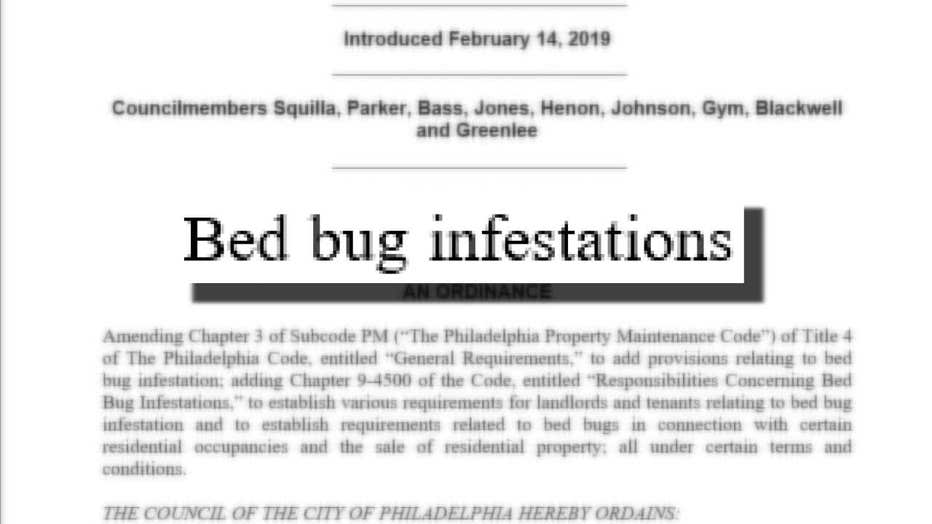 There are concerns and pushback from landlords and city code enforcement agents.

A statement from the Pennsylvania Apartment Association East reads in part: "We certainly support aggressive and prompt measures to deal with bed bugs, but the bill as written has some flaws which would make its implementation difficult and costly for both renters and owners..."

Pennsylvania residents who believe they have an infestation and would like to have an insect identified can contact their local Penn State Extension county office: https://extension.psu.edu/county-offices
Philadelphia residents can email photos to: Philadelphiaext@psu.edu or call 215-471-2200.