PHILADELPHIA - Protesters marched through Center City on Sunday calling for the resignation of Philadelphia Mayor Jim Kenney after he oversaw the alleged mistreatment of peaceful protesters on I-676 last month.

Organizers began their rally at City Hall at 1 p.m. and marched to I-676, where the city's controversial mistreatment of protesters took place. In response to the protest, the city closed the highway between I-76 and I-95 for more than an hour.

On June 1, crowds of protesters spilled onto a stretch of I-676 near Center City and halted traffic. SWAT officers used tear gas and nonlethal bullets to defuse the crowd. More than two dozen people were arrested.

Since then, an investigation into the incident caused city officials, including Mayor Kenney and Commissioner Outlaw, to apologize for law enforcement's actions. Dennis Wilson, the Deputy Commissioner who oversaw SWAT response on that day, voluntarily demote himself to Chief Inspector.

“I humbly apologize to those who were directly impacted as well as to our communities at large," Outlaw said.

A video posted by the New York Times showed officers abusing protesters with tear gas from a close range. Outlaw said she was "extremely disturbed and quiet frankly sickened beyond description" by some of the abuse of force seen in the video. 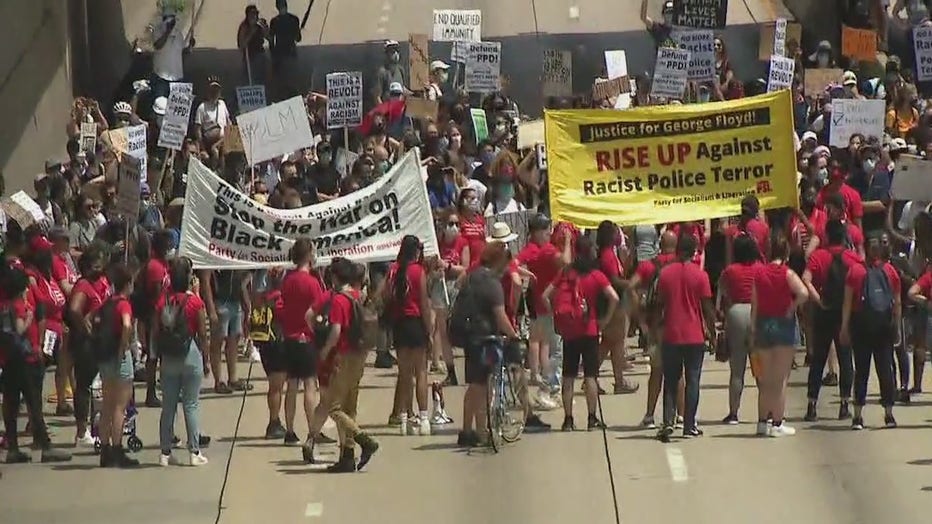 Outlaw issued an immediate moratorium on the use of tear gas in most situations including to disperse crowds of non-violent people.

"The use of OC is not to be used for the dispersal of non-violent persons or disorderly crowds and in situations where people are peacefully exercising their constitutional right of free speech," she added.

Outlaw said she is committed to repairing the damage the event has caused to already strained police-community relations.

Organizers on Sunday said they do not accept the city's "insincere apologies for the brutal attacks on peaceful protesters."

"We demand Mayor Kenney resigns now," a release read. "The attacks and subsequent lies about what happened in West Philly on May 31st and I-676 on June 1st are unforgivable."

In addition to Kenney's resignation, the group also demands police be disarmed of firearms and crowd control weapons.