Commissioner Outlaw on I-676 clash: ‘When we deploy tear gas it’s for a purpose’

Philadelphia's police commissioner further explained the use of force on Monday, adding that protests moving onto the freeway are 'no longer deemed peaceful.'

PHILADELPHIA - Tear gas was used as “a means to safely diffuse a volatile and dangerous situation” when protesters spilled onto an interstate highway in the heart of Philadelphia just before a curfew took effect, the city's police commissioner said.

The tear gas was used “when it became increasingly clear that other measures were ineffective" at dispersing the crowd, Police Commissioner Danielle Outlaw said. Outlaw also pointed to an incident involving a Pennsylvania State Police vehicle once protesters gained access to the highway as prompting the use of force.

"While on the roadway, the crowd surrounded a State Trooper, who was alone and seated in his vehicle, and began rocking the vehicle, with the trooper having no safe means of egress," Outlaw and  Philadelphia Mayor Jim Kenney said in a joint statement released Monday night.

In the same statement, Kenney and Outlaw explained that not all of the canisters used contained tear gas. Instead, the department also used non-chemical white smoke.

"This simultaneous deployment allows the officers to use less CS gas, while maintaining a deterrent visual effect," the statement read. 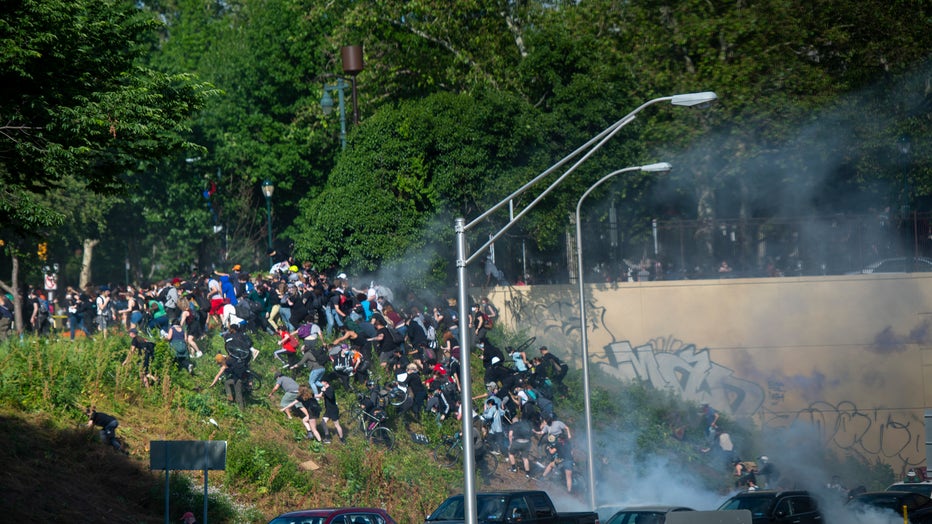 The protests had mostly been peaceful before its chaotic conclusion Monday. It was among several staged across the country, inspired by the death last week of George Floyd, a black man who died after he was pinned by a white Minneapolis officer who put his knee on Floyd's neck.

Outlaw says once the protest hit the freeway, it was "no longer deemed peaceful."

“When we deploy tear gas it’s for a purpose. It’s to disperse, but then also to make arrests after. There’s a lot of things that we have to take into consideration when folks run up onto a freeway. At that point it’s not deemed peaceful. There’s moving vehicles, they can get hurt, people in the vehicles can get hurt. Then you have people that we don’t have control over that might take action upon themselves because they’re frustrated against the protesters,” Outlaw said Tuesday.

Commissioner: Tear gas used on crowd on I-676 after ‘other options were not effective’

She went on to further explain why the department felt it necessary to clear the freeway.

“I hear it all the time, ‘why don’t you just let them roam free, shut down the freeway and just let them take the freeway?’ You have to make decisions as it occurs and I’m not going to Monday morning quarterback but I can tell you that there’s very clear guidelines under our use of force policy. “

Outlaw says video of the incident is an important tool in their administrative investigations. Among the factors they will be looking into is what other routes of exiting the roadway were available to the protesters besides the hill where many were seen cornered by fencing.

“We will continue to evaluate the propriety of all applications of force, and make determinations as the circumstances of each unique situation dictate,” Outlaw added.

The confrontation in Philadelphia came after the National Guard stationed vehicles outside City Hall and other downtown buildings, officials curtailed public transit, and city leaders put a curfew in effect for a third day Monday after a weekend of destruction that led to over 400 arrests.